When I look back on 2011, it will be a year where the performances actually outshined the finished films. While several movies became favorites of mine, it was the wide range of high quality acting work that really impressed me. Since we have talked about the ladies, let’s get to my top 5 male leading performances for 2011. Again, it was hard to leave a couple of names off this list, but this is one solid group of actors. 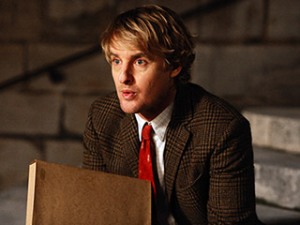 I’m as surprised at this as anyone else. I’m not the biggest Owen Wilson fan. I’ve often times found him over the top and just too goofy for my taste. But while we get hints of the Owen Wilson we’ve seen in past movies, in “Midnight in Paris” he seems more controlled and tempered while still being genuinely funny. I really liked Gil Pender and appreciated how Wilson brings him to life. Woody Allen’s influence can certainly be seen, but Wilson makes the character his own and sells him beautifully.

I wasn’t as crazy about Alexander Payne’s “The Descendants” as most people, but there’s no denying the brilliant work from George Clooney in the lead role. Clooney honestly makes everyone else who shares a scene with him better. He doesn’t dominate the scenes or call unmerited attention to what he’s doing. It’s a very real and organic performance and one that definitely deserves the attention it has received.

I was a bit surprised to see Mel Gibson shunned this awards season. Hollywood and the Academy are extremely selective in terms of forgiveness regardless of how much hypocrisy their selectivity exposes. I’m not trying to be a Gibson sympathizer, but his performance in “The Beaver” is not only one of the best performances of the year, but some of the best work of his career. Obviously Gibson knows what it means to be a damaged man but to see it played out with such authenticity on screen was truly stirring. More people should give “The Beaver” a chance. If you do, Gibson’s performance can’t help but be appreciated.

From the first moment you see Jean Dujardin on screen in “The Artist”, you know you’re seeing something special. His precision and detail in bringing a silent movie character to life goes well past nostalgia. He brought more life to his George Valentin character with the handicap of no voice work than nearly every other performance of 2011. He certainly pays homage to a bygone era of filmmaking. But he also conveys the humor and drama from his character in a way that blew my mind. A truly brilliant performance.

Even with such great acting as I’ve already mentioned, no one effected me more than Michael Shannon in “Take Shelter”. He undoubtedly delivers one of the most painfully tragic performances I’ve seen in years. His depiction of mental illness is unique in that his character sees what’s coming. He has seen it in his mother and his biggest concern is on how it will effect his own family. It’s a crushing and emotional performance that was head-amd-shoulders above anything else I saw in 2011. It’s such a shame that he has gone overlooked.