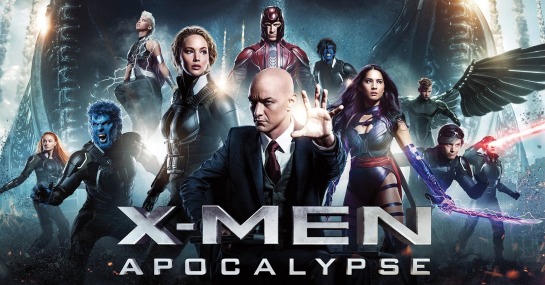 So exactly how do you categorize “X-Men: Apocalypse”? Is it the sixth film of the X-Men franchise or is it the third film in the second trilogy? Perhaps a hybrid of both? Do we even count the Deadpool and Wolverine movies? Whatever you call it, it is the follow-up to 2014’s “Days of Future Past” and the third film featuring this new wave of X-Men characters some of whom are actually younger versions of older characters. Clear as mud, right?

“Days of Future Past” made a strong attempt at bringing the first original three X-Men films together with the new ones. Arguably it did a decent job of accomplishing that rather hefty task. But now “Apocalypse” comes along and injects a little more confusion by tossing in more new mutants, bringing back old ones, and leaving you unsure how some of it all fits together.

At the same time the film shows satisfying flashes of brilliance as it deals head-on with weighty topics of personal struggle, loss, and self-sacrifice. It also offers several moments (particularly in the second half) that will genuinely excite die-hard fans. But who knows whether those moments are enough to overcome the film’s many crazy contortions of the source material whether it be characters, back stories, or storylines. 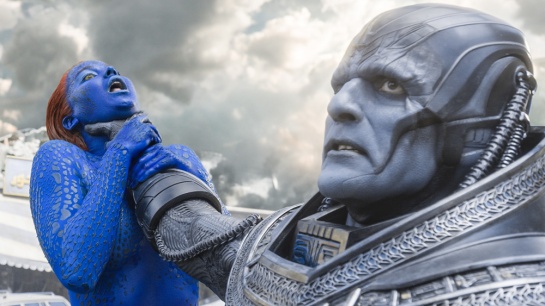 X-Men architect and shepherd Bryan Singer returns as director, producer, and co-writer. This time his villain is Apocalypse (played by an unrecognizable Oscar Isaac), a powerful mutant worshiped by the ancient Egyptians but betrayed by a sect of non believers. His body is buried under a collapsed pyramid until he is unearthed and awoken in 1983. Ashamed of the perceived weakness of Earth, Apocalypse pledges to destroy the world and then raise it in his image, stripping power from the weak and granting it to the strong.

In addition to that we also get a number of side stories intended to fill us in on old characters as well as introduce us to new ones. Charles Xavier (James McAvoy) continues growing his school for young mutants. Mystique (Jennifer Lawrence) is smuggling mutants out of dangerous locales around the globe. Magneto (Michael Fassbender) is a mill worker living in Poland with his wife and daughter. Then we get into the stories of a ton of new characters. It takes over an hour to get all of the introductions out of the way and the principle story pieces in place.

The first hour is tough. There are several compelling individual sequences, but collectively it’s a mishmash of origin stories and mandatory table setting. To Singer’s credit he does manage to reel in most of his moving parts and piece them together pretty well by the final act. But at the same time it’s hard to ignore how the film turns a blind eye to several glaring plot problems. I mean am I silly to think they might address the 10 million people killed when a city is leveled?

Thankfully the script does allow for some interesting character exploration and development. Characters are overwhelmed with sorrow, crumble to inner turmoil, battle depression and feelings of isolation, and of course struggle with the common X-Men theme of belonging. Most of these issues are handled with a genuine sensibility that allows the characters to be seen as more than disposable even though the script sometimes shortchanges them.

By the third act the movie is pretty much in tune with the common superhero formula – a gigantic, loud, action-packed finale. But I have to say it’s a good one. There are some fun superhero effects and several moments that will bring smiles to the faces of those familiar with the history of these characters. I’m not too sure if it will have the same effect on casual fans.

“X-Men: Apocalypse” won’t do much to cure some people’s comic book movie fatigue, but for those still enjoying these superhero tales there are things to like. Fassbender and McAvoy are fantastic. The story doesn’t shy away from deeper human themes. There are tons of little treats and several fun surprises for fans. But there is also a bloated first hour and several head-scratching oversights as the story progresses. There still is plenty to admire and Singer’s vision is ambitious. I can easily say I was entertained. I can just as easily understand how others may not be.