For Martin Scorsese bringing “Silence” to the screen has been a fascinating journey. It started as an inspiration in 1989. Over the next 25 years it grew and evolved into something deeply personal for the filmmaker. In several interviews Scorsese has intimated that the film’s conceptual evolution mirrored his very own spiritual maturation. This intimate connection seeps from every pore of “Silence” making it a profoundly affecting labor of love.

It was in 1989 that Scorsese first read “Silence”, Shūsaku Endō’s historical fiction novel published in 1966. Scorsese immediately knew he wanted to make a film adaptation but he didn’t know how. Early attempts lead to an unfinished script in 1991. Plans to begin production in 1997 were postponed. More delays came in 2004 and 2011. But these postponements weren’t without purpose. During that time Scorsese gained a better sense of what “Silence” was saying. In his words he finally figured out “the heart of the book”.

Endō’s novel is a deep exploration of the depths of faith. It drills below the surface-level perceptions of faith, down to its most bare and intimate state. Scorsese’s cinematic study of this central spiritual theme is absorbing but also challenging. The story he and co-writer Jay Cocks tells is powerful and rooted in historical significance. At the same time the film is a bruising meditation that is calling its audience to self-reflection.

To get us to that point we follow two 17th century Portuguese Jesuit priests, Father Sebastião Rodrigues (James Garfield) and Father Francisco Garupe (Adam Driver). The two receive word that their mentor Father Ferreira (Liam Neeson) has vanished after renouncing his faith amid intense persecution in the mission fields of Japan. Unconvinced of Ferreira’s apostasy, the two priests set out to find their mentor’s whereabouts despite the cloud of danger awaiting them.

The Japan of the 17th century was controlled by the Tokugawa shogunate. Christianity was deemed a threat and subsequently outlawed. Anyone breaking these laws faced torture and/or execution. It’s here that Father Rodrigues and Father Garupe sneak ashore with the aid of a boozing local vagrant named Kichijiro (Yôsuke Kubozuka). There the “padres” connect with a small village of Christians who secretly practice their faith in the dark of night. 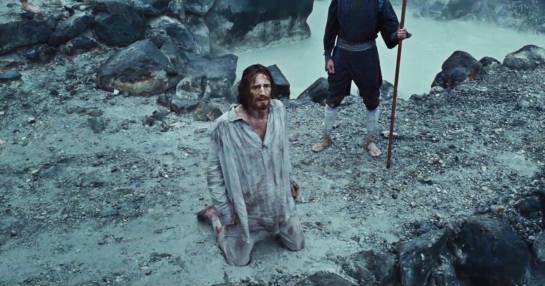 It’s worth noting Scorsese’s use of his camera to portray the arduous, uncompromising world these two priests enter into. It feels just as foreign to us as it does them. Even the sound design contributes to the sense of uncertainty and isolation. The heightened sounds of nature routinely take the place of a your standard musical score and sometimes the silence itself speaks volumes.

Rodrigues and Garupe establish a semblance of ministerial and sacramental normalcy for the village believers and as a result see their own faith strengthened. But the region’s ruling shogunate led by the freakishly blithe and casually brutal Inquisitor Inoue (Issey Ogata) is intent on rooting out and purging the land of Christianity. His dogged persistence paves the way to the film’s central conflict – something much deeper than a faithful Christian versus his relentless persecutor.

The further you get into “Silence” the better you understand the challenge Scorsese lays before us. The obvious storyline is compelling, but to truly understand the heart of the story requires a willingness to internalize the theme of faith and reckon with what is revealed to you. Yes, it’s a deeply spiritual film but not a preachy one. In fact it could be said it asks more questions than it answers. Still Scorsese ponders these ideas with the sincerest curiosity and unflinching patience – the essence of faith, the pain of betrayal, our human frailty. And what do we make of God’s silence in the midst of tremendous suffering?

As you would expect the performances are sublime. Neeson’s portrait of anguish and conflict helps make his handful of scenes some of the film’s finest. Driver is as tense as he is gaunt which is strikingly in-tune with his type of character. That gets to Garfield, a guy who has steadily gotten better with each role he has taken. In “Silence” he literally transforms before our eyes both in character and performance. He plays it a bit safe early on but quickly tosses aside all restraints and commits every ounce of himself. Portraying spiritual struggle is tough and Garfield impressively carries the bulk of that load.

It has taken me two viewings and a lot of wrestling to truly figure out how I feel about this film and what it means to me. It’s that type of movie – one that can’t be appreciated with a mere surface reading. Despite its incredible artistry and beautifully sculpted scenes (cinematographer Rodrigo Prieto deserves an Oscar nomination), “Silence” seeks to be something more – a spiritual epic that not only reflects where Scorsese is in his personal journey but challenges us in ours.

“Silence” is a film that may not sit well with Scorsese die-hards looking for his normal cinematic swagger and it certainly doesn’t aim to be a 2 hour and 40 minute crowd-pleaser. But after a second look it clicked for me in every meaningful way. I still have questions the movie stirred up within me and I love the its unwillingness to give me every answer. In fact Scorsese isn’t saying he has every answer. But he is saying the questions are worth asking, and the answers you get just might change your life.