When watching Bryan Fogel’s now Oscar-nominated “Icarus” I couldn’t help but think of Morgan Sperlock’s “Super Size Me” but with performance-enhancing drugs replacing McDonalds. At least that’s how it starts. But the further it goes Fogel’s documentary (originally meant to show the effects of PEDs) inadvertently becomes an stunning exposé on how the recent Russian doping scandal was brought to light.

Filmmaker, playwright, and cycling enthusiast Bryan Fogel set out to show how PEDs enhance athletic performance through experimentation. But he also aimed to see if he cover his usage and pass an anti-doping test. Over several months he injected himself with a series of steroids and growth hormones and documented the results.

Fogel’s experiment was first overseen by Don Catlin who founded the first anti-doping lab in the United States. But Caitlin grew uncomfortable with how it might effect his reputation so he connected Fogel to Grigory Rodchenkov, the director of Russia’s national antidoping laboratory. Grigory walks Fogel through a intensive PED regiment and reveals his process for avoiding a positive drug test.

Through their experiment the two men develop a close friendship and Grigory begins sharing the details and inner workings of Russia’s elaborate state-ran doping scheme. He unveils startling information about the Russian Olympic teams and the involvement of the Russian government. Fogel quickly learns he has stubbled into something far more significant and potentially earth-shattering than his original subject. 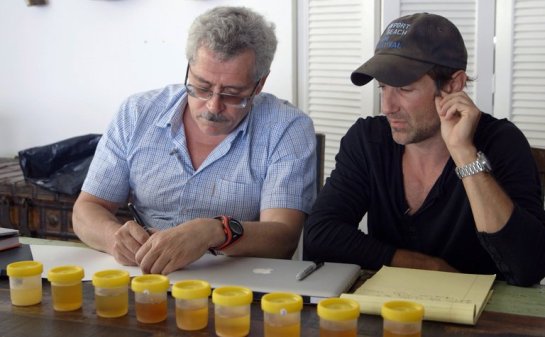 As “Icarus” moves forward it makes a substantial shift from fairly mundane to thoroughly riveting. The film starts slow as Fogel spends a bit too much time documenting the first stages of his steroid experiment and how it impacts his performance in the Haute Route cycling competition. But it takes an entirely different form the moment Grigory enters the picture.

Fogel comes across as genuinely overwhelmed by the flood of shocking revelation and his film does a great job conveying that nervousness and uncertainty. The sheer magnitude of the scandal and the wide-reaching impact of Grigory’s willingness to go public adds a level of intensity akin to an edge-of-your-seat spy thriller. And despite its slow start, “Icarus” sucks you into the elaborate and dangerous web of scandal that shook the international sports community to its core. At the same time it shines a bright light on the political powers who will use anyone, whether it be Grigory or the hundreds of Olympic athletes, to accomplish their will. And miraculously Fogel just happened upon it.