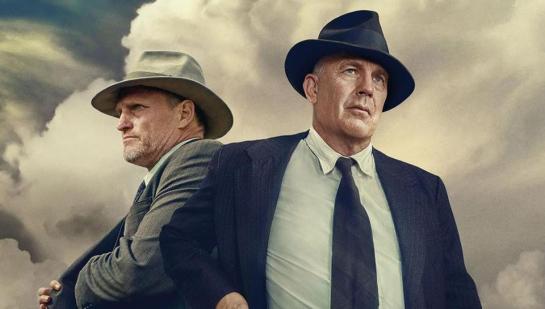 For me the allure of Kevin Costner and Woody Harrelson playing Texas Rangers sent to hunt down the notorious Bonnie and Clyde is undeniable. I’m a long-time fan of Costner who vanished from the screen for a while but seems to have nicely settled into a new stage of his career. And then you have Harrelson – always interesting, always entertaining.

The two pair up in “The Highwaymen”, a period crime thriller that was first pitched as early as 2005. Screenwriter John Fusco’s original vision was to have Paul Newman and Robert Redford play the veteran lawmen. After sitting in development for years with Universal Studios, Netflix acquired the rights in 2017 with two new leads and John Lee Hancock set to direct.

“The Highwaymen” quickly sets itself up as slow-burning crime investigation thriller. The story starts in 1934, Bonnie Parker and Clyde Barrow having been on the run for over two years. The notorious couple carry out a violent jailbreak at Eastham Prison Farm in Texas. Lee Simmons (the always good John Carroll Lynch), head of the Texas Department of Corrections, urges an image-conscious Governor “Ma” Ferguson (Kathy Bates) to take drastic measures to finally end the murderous crime spree.

Simmons convinces a reluctant Ferguson to hire former Texas Ranger Frank Hamer (Costner) to track down Bonnie and Clyde and “put ’em on the spot” (you can probably guess what that means). An interesting bit of history – Hamer and forty other Rangers resigned after “Ma” Ferguson won a second term. She had been proven corrupt and quickly fired all remaining Rangers replacing them with her own more ‘modern’ law enforcement. Simmons and Fusco use that internal tension several times during the film.

Costner shows us an abrasive, hard-edged Frank Hamer (love the performance). He’s a principled man clearly bitter over the dismissal of the Rangers but driven by the death of other lawmen to put an end to the Barrow gang. Hamer hesitantly brings along his old partner Maney Gault (Harrelson) and the pair begin studying the gangs patterns and following their blood trail through the lower Midwest. Harrelson is a nice complement to Costner, working at a different temperature and offering a needed balance to their mission. 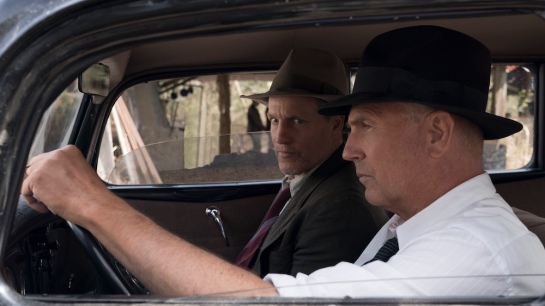 It’s not a stretch to call this an inadvertent companion piece to Arthur Penn’s beloved 1967 picture “Bonnie and Clyde”. Penn painted a somewhat romanticized portrait of the Barrow gang while “The Highwaymen” distinctly looks from the lawmen’s perspective. It allows for a critical view of the rogue couple’s cult-like following and of how cultural fame is often rooted in absurdity. Glamorizing news stories, skewed comparisons to Robin Hood, young women dressing like Bonnie Parker. “They’re more adored than movie stars” one character mutters.

Admittedly there is an old-fashioned flavor to “The Highwaymen” that is sure to push some people away. You see it in how it tells its story and even in how it’s made. I get the inevitable complaints of “too slow” and “not enough action”. Yet I found myself loving it – the slow burn, the prickly Costner, the subtle moral questions it tosses out there. It all works, like a cool flashback to a classic film style I’ve never grown tired of. But how will that play today? It will be interesting to see.

16 thoughts on “REVIEW: “The Highwaymen””