I can say with absolute certainty that there was no part of me yearning for another “Men in Black” sequel. I was never a big fan of the original 1997 film with Will Smith and Tommy Lee Jones. Even less enthused about the next two sequels. So could a spin-off movie eight years later with fresh new faces invigorate the franchise for a new audience? If comparing box office numbers, the answer is a resounding ‘No’.

Here’s the surprising thing – “Men in Black: International” isn’t terrible. In fact it can be surprisingly fun at times. Predictable, unimaginative, and unnecessary? For sure. But the charisma and chemistry between its two stars Chris Hemsworth and Tessa Thompson at least makes the globetrotting goofiness bearable.

The story (penned by Art Marcum and Matt Holloway) begins with two flashbacks. One back to 2016 where Agent H (Hemsworth) and High T (Liam Neeson) fight off an alien invasion on top of the Eiffel Tower. The second is 20 years earlier in Brooklyn where a young girl named Molly helps a friendly alien escape as Men in Black agents wipe the memories of her parents. 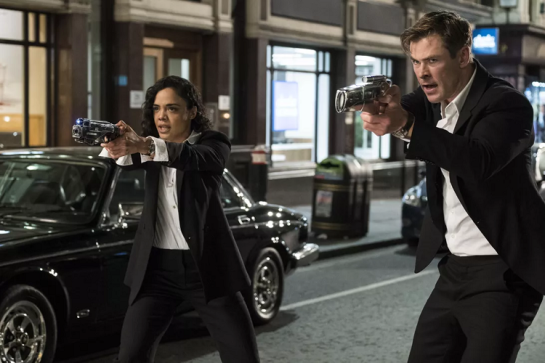 Twenty-three years later the bookish Molly (Thompson) sneaks her way into the MiB New York City headquarters aspiring to join their ranks. She makes a strong impression which prompts the head of the US division (Emma Thompson) to give her probationary status as Agent M. She is assigned to the London branch of the MiB which is ran by High T. and is partnered with the disaffected Agent H to stop two twins empowered with alien energy and so on.

Along the way we meet Kumail Nanjiani voicing a tiny alien chess piece creature named (of course) Pawny and Rebecca Ferguson as one of H’s old flames. Both are good performers and they have their moments but neither add much to the story. It all comes back to how much of the load Hemsworth and Thompson can carry. The pair definitely do their part but the movie needs more than just two likable leads.

“Men in Black: International” disappointed at the box office and numbers show it didn’t quite break even. You have to think this will mark the end of a franchise that (if we’re honest) probably shouldn’t have been resurrected to begin with. But it was, it came, it went, and (for many) I’m sure it has already been forgotten. I can understand why. It’s pretty middling entertainment with nothing particularly memorable or exciting to offer.