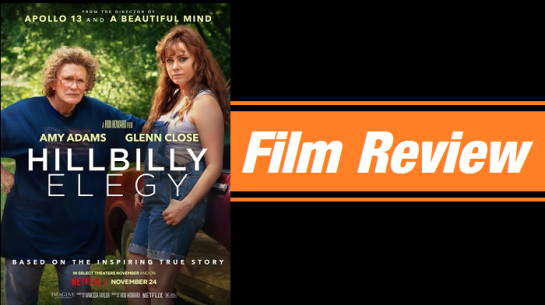 When J.D. Vance’s memoir “Hillbilly Elegy” came out in 2016 it was almost instantly thrust into the divisive political arena. To no surprise many partisans from both sides of the aisle had dramatically different reactions to book. But at it’s heart Vance’s memoir was a deeply personal work. It was a therapeutic release derived from his first-hand experiences growing up among three generations of a troubled Appalachian family. The poverty, the physical and verbal abuse, the cyclical nature of his family’s plight – just some of the things that clearly left their mark on Vance.

Director Ron Howard teams with screenwriter Vanessa Taylor in adapting “Hillbilly Elegy” for Netflix. Their film is told from Vance’s point-of-view, both from his teen years (where he’s played by Owen Asztalos) and as a college student (played by Gabriel Basso). Howard and Taylor nimbly maneuver along the two timelines, frequently crossing over in an effort to capture where J.D. came from and what he’s trying to escape.

The performance many will be talking about/debating comes from Amy Adams. She plays J.D’s mother Bev, a woman known more for her history of drug abuse and failed relationships than for being a loving and responsible parent. Adams gives an undoubtedly big performance, sometimes sucking all the air out of a scene. But that’s more to do with the writing and directing than the actress. Adams is fully committed and convincing. But Bev lacks the complexity the film wants her to have mainly because far to little time is spent fleshing out any redeemable qualities. We’re given light strokes but hardly anything that evokes sympathy.

Glenn Close is given a much more rounded character. She plays J.D.’s tough-skinned, tough-tongued grandmother who makes it her job to keep the family together. Close goes big in a few scenes herself, but she’s also given quieter moments that add dimension and clarity to her character. It’s a bit startling how much Close resembles Vance’s real-life Mamaw (we see her picture during the end credits). Her transformation and performance both help form a character who ends up saving numerous scenes from getting out of hand.

The story attempts to cover a lot of ground, settling mostly in the family’s hometown of Middleton, Ohio. The early images of a once bustling town drying up and dying really resonates. As does the terrific production design from Molly Hughes and the set decoration from Laura Belle and Merissa Lombardo. They create very real and lived-in spaces while offering a vivid portrait of struggling low-income living. “Whatever better life my grandparents had been chasing up Route 23 they never caught it“, says J.D. in narration.

While J.D.’s teen years show us a good kid surrounded by heartbreak and hopelessness, his college scenes reveal a young man working hard to break out of his family’s mold. J.D. works three jobs while attending Yale Law School  and has beautiful and supportive girlfriend named Usha (played by the 36-year-old  Freida Pinto who can still easily pass for a college student) . But when those inseparable family bonds (specifically his mother’s demons) tempt  to pull him back in, J.D. is forced to make some life-defining choices. 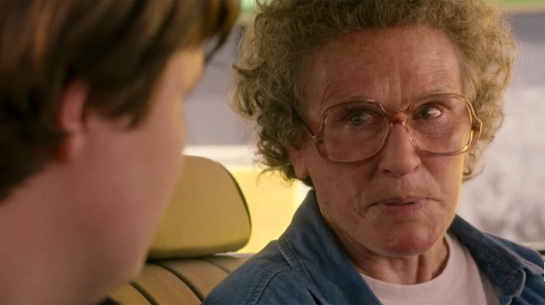 It’s here that Howard and Taylor wrestle with the idea of family obligation and expectation. We know what J.D. should do regardless of how difficult it would be. But it clashes with his deep-rooted sense of family duty which gives us one of the film’s more well-developed conflicts. Does he remain a product of his raising or does he pursue the better life that is waiting for him at Yale. Or the bigger question – is it possible to do both?

“Hillbilly Elegy” isn’t the easiest material to cover but Howard gives it his best. It’s a gritty, coarse and intense family drama that works really hard to sell itself. Unfortunately there are a few loose threads and narrative oversights that hold it back. Keeping us almost exclusively behind J.D.’s eyes doesn’t always work either. Both performances, young and old, can be a little dry and you’ll often find yourself more invested in the characters around him. It doesn’t squash the things “Hillbilly Elegy” does right, but it does leave the film feeling like a missed opportunity. “Hillbilly Elegy” opens November 11th in select theaters and premieres on Netflix November 24th.