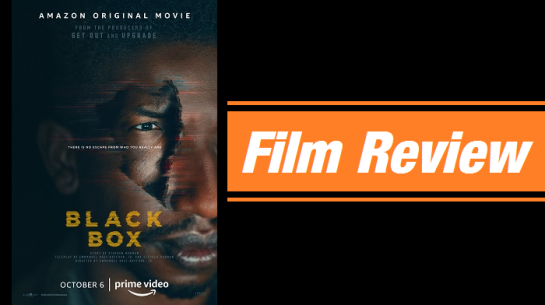 It was roughly one year ago that we first learned Amazon Studios was partnering with Blumhouse to bring eight original movies to their Prime Video streaming platform. “Welcome to Blumhouse” would offer the (mostly) horror-centered production company the opportunity to highlight a fresh group of talented filmmakers. Founder Jason Blum assured that the eight interconnected films would feature the company’s signature chills and all will explore “family and love as a redemptive or destructive force” in their own unique way.

One of first films from the partnership is “Black Box” from director Emmanuel Osei-Kuffour Jr. The story follows a young father named Nolan (played by the immensely talented Mamoudou Athie) who loses his wife and memory in a tragic car accident. In the few years that have followed he has regained a sense of the man he was in large part thanks to his mature-beyond-her-years daughter Ava (Amanda Christine). But despite his and his daughter’s best efforts, Nolan can’t seem to get back on track. 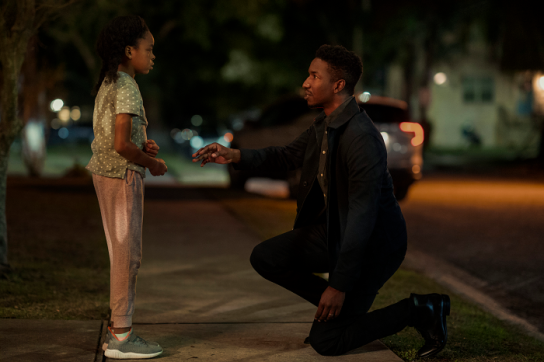 Ava has essentially taken on the parent role – running her father through memory exercises, prepping him for a meeting with his boss, chiding him when he pulls out a pack of cigarettes. “You don’t smoke!” But when Nolan forgets to pick Ava up from school for the umpteenth time, the threat of child services pushes him to seek professional help. His pal Gary (Tosin Morohunfola) recommends Dr. Lillian Brooks (Phylicia Rashad), a well-respected neuroscientist who urges Nolan to take part in her Cognitive Research Study. Skeptical but desperate, Nolan agrees to an experimental therapy which Dr. Brooks assures will reconnect him to his lost memories.

Dr. Brooks connects Nolan to what she calls her Black Box, a virtual reality-like experience that transports her patients deep into their subconscious to find and relive old memories. Once inside Nolan begins seeing fragments of memories of his wedding and of when Ava was a baby. But not everything is as it should be, most notably all of the people’s faces are blurred. Even worst, every time he enters the Black Box he is terrorized by a ghastly human-like creature with popping joints and crackling limbs. Certainly all of it means something, but Nolan can’t figure it out and Dr. Brooks dismisses it as part of the treatment. Ultimately he begins seeing things that leaves him questioning whether he’s really the man everyone says he is. 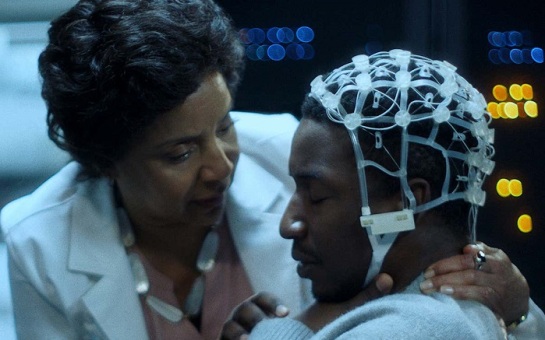 Light on gore and free of tired and overused jump scares, “Black Box” leans more into psychological thriller territory, underpinning its story with elements of science-fiction and horror. The script (co-written by Osei-Kuffour Jr. and Stephen Herman) takes a ‘just go with it’ approach to the science, explaining it but sweeping most of the details under the rug. And while it doesn’t telegraph it’s big twist, it all but draws a big bright circle around its antagonist. And by setting our eyes on the baddie early, it can’t help but undercut the suspense.

The story makes up for it in its handling of Nolan. Osei-Kuffour Jr. and Herman write a character that Mamoudou Athie can really sink his teeth into – someone with emotional depth and personal stakes worth investing in. And I don’t want to shortchange the film’s heady ideas and clever twist which adds a fun and unexpected layer. Also two thumbs-up to the eerie score from Brandon Roberts and Osei-Kuffour Jr.’s imagination and resourcefulness in navigating budget constraints while still maintaining a visually compelling style. It’s a solid effort from a first-time feature film director with a promising career ahead of him. “Black Box” is streaming now on Amazon Prime.