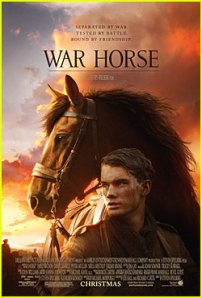 “War Horse” is a Steven Spielberg movie throughout. It’s broad in scope, has huge production value, and soaked in melodrama. Spielberg produced and directed this war time period film and it features beautiful locations and several large-scale action scenes and set pieces. He has made several of these ambitious war pictures before so he’s in familiar territory. But his biggest challenge is taking a horse and making him the main star while keeping the audience engaged for the movie’s two and a half hour running time. “War Horse” does succeed in several areas but it never completely captures or maintains the emotional charge that it aims for.

Based on a 1982 children’s book, “War Horse” follows a very special young colt who is unwisely bought at an auction by a struggling farmer who is supposed to be buying a bigger, stronger plow horse. The farmer’s wife is furious with the purchase but their young son Albert promises to raise and train the horse who he names Joey to eventually plow their hard, rocky farm plot. The family hits even harder times and circumstances arise that sees Joey thrust into the onset of World War I. “War Horse” never stays in the same place very long and becomes a collection of brief short stories about the people Joey encounters including a military officer heading to war, two young brothers reluctantly serving on the German front, and an elderly French farmer and his granddaughter. There are several other scenes featuring other characters but the one constant throughout is Joey.

This storytelling technique works good in the broad sense. Joey is certainly an incredible animal and I couldn’t help but stay interested regardless of the convenience that dictates many of his situations. I particularly enjoyed the story of Joey and the military officer played wonderfully by Tom Hiddleston. Equally good were the scenes with the French Farmer played by the fantastic French actor Niels Arestrup and his young granddaughter Emilie played by the lovely Celine Buckens. These are the films best scenes and I can’t help but wish we could have gotten more from these characters. But as I mentioned, Joey is the real star and I was amazed that Spielberg was able to draw so much character out of his lead. As many as eight different horses played the part of Joey and even though the director uses several instances of emotional manipulation, the horse we get on-screen held my interest throughout.

But there was something missing in the movie. It’s clear what the movie wants to be but I could never get as emotionally invested as I was supposed to be. Some of the tugs at our heart-strings felt a bit artificial and there are several animal movie clichés that the movie fully embraces. It was also rather predictable in some areas and I found myself figuring out things well before they culminated on the screen. As with many Spielberg pictures, subtly isn’t a strong point and his attempts to bring tears feel heavy on delivery but light in effect. And with a movie that is striving to be an emotionally driven family drama, that hurts the film.

Flaws aside, “War Horse” is a very watchable film and even flirts with occasional greatness. As expected, it’s technically sound with some beautiful camera work, fantastic locations, and crisp editing. I loved the shots of the English countryside and the dank, muddy, war-torn areas are perfectly fitting. All the performances are solid and some of the character stories are great. There is a lot of charm and heart in “War Horse” but there are also several cheap and lazy attempts to bring out the tissues. It’s a good movie and one that I would certainly watch again. But I can’t help feel that with a tighter script and a slightly different approach, “War Horse” could have been a serious Oscar contender.