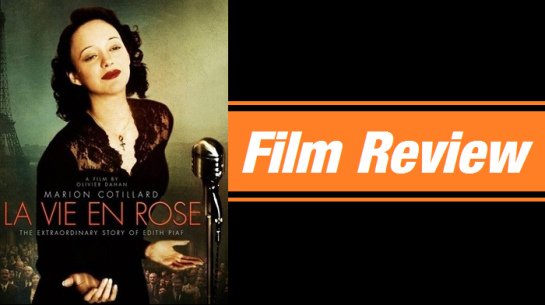 Edith Piaf was a brilliant young singer who had a life filled with joy and tragedy. She was born in the Belleville district in Paris, France and survived a difficult childhood to become one of France’s most beloved singers and a national icon. But her life was a constant struggle even in light of her huge success. “La Vie en rose” is a French biopic about the life of Edith Piaf from director and co-writer Olivier Dahan. Marion Cotillard stars as Piaf and delivers a brilliant performance that earned her the Academy Award for Best Actress. This was also significant in that it was the first time an Oscar was given for a French language performance.

The story of “La Vie en rose” is told in a very unconventional way. There’s no straightforward chronological narrative. The movie jumps back and forth between different periods of Piaf’s life. Sometimes this storytelling method works while other times it seems to shift between time with no cause or reason. There’s one particular tragic event that happens early in Piaf’s life but we never know anything about it until close to the end of the film. There’s no real structural reason that would cause it to be incorporated into the story at that time but nonetheless it is. I’m assuming the non-linear approach was an attempt to make it feel more unique and different from other biopics. This isn’t a bad approach but I still would have preferred a more straightaway mode of storytelling.

While the movie does frantically hop around, it does keep most of her childhood together at the start of the film. It’s very effective in conveying the reasons for her lifetime of trouble. The film shows how she was abandoned by her parents. We see how she is raised for several years in a Normandy brothel. We also see her spending time confined to a struggling traveling circus with her father. As a teenager she’s forced to sing on the streets to survive until she is discovered by the owner of a small nightclub. All of these things lay the groundwork for what was a complicated and often times hard life and her personal hardships often times overshadowed her incredible talent.

One of the main reasons to see “La Vie en rose” is for Marion Cotillard’s wonderful and mesmerizing performance. Cotillard spent a lot of time listening to, watching, and studying interviews by Edith Piaf and it really pays off. She completely loses herself in the role and at times she’s almost unrecognizable. The story required Cotillard to play Piaf at different ages and in different stages of health. I was amazed watching her capture the energy and exuberance of a young 18-year old girl as well as the frailty and emptiness of a 47-year old on her death bed who looks twenty years older than she really is. Cotillard’s Oscar win is completely justified and she takes this role of a lifetime and makes it unforgettable.

The life of Edith Piaf was filled personal highs and devastating lows. “La Vie en rose” shows it to us through it’s truly enthralling and heart-breaking presentation. It captures the special spirit of this larger-than-life personality which makes watching her troubled life unfold all the more painful. It does require an unnecessarily high level of concentration due to the fractured narrative which really adds nothing to the film. And while it still uses some of the same conventions that we’ve seen in other biopics, its still a powerful story. This isn’t a flawless film but I found myself totally involved right from the very start.