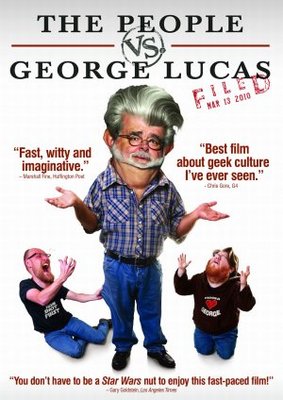 There is a great statement midway through the 2010 documentary The People vs. George Lucas – “Fandom is born out of a mix of fascination and frustration”. That statement gets to the heart of what this film is all about. George Lucas’ Star Wars franchise has arguably the most rabidly passionate and vocal fan bases in all of geekdom. Now don’t misunderstand me, that’s not intended to be an insult. I’m right there with them, although admittedly to a lesser degree. I don’t dress up in Star Wars garb or buy every new toy with the Star Wars name attached. But in the interest of full disclosure (and in an attempt to show my credentials) I do have a box of about 20 unopened action figures tucked away in my closet and I still love the Star Wars expanded universe graphic novels. I know what bantha poodoo is and I can easily identify Poggle the Lesser. In other words, I can relate to these crazed fans who have loved Star Wars since their childhood.

Director Alexandre Philippe documentary is a look at the strong love/hate relationship that these dedicated Star Wars fans have with George Lucas. Throughout the years Lucas has flaunted his creative control of his Star Wars franchise in ways that has infuriated hardcore fans. Philippe doesn’t intend to take sides as he tackles the bigger question of whether Star Wars belongs solely in the hands of its creator or does it in a very real and personal way belong to the people. The film features interviews with directors, film students, critics, bloggers, and more all sharing a bond as die-hard Star Wars enthusiasts. Lucas isn’t interviewed but we do get archived footage of other interviews he’s done in the past.

A small case is made for creator rights but for the most part this is about fans voicing their displeasure and their personal frustrations with Lucas’s decisions in regard to Star Wars. The film gives them a forum to voice their anger while also showing the audience how serious this is for some people. Many of the interviewers berate Lucas particularly for his ironclad hold on Star Wars. There’s also a very damning section that talks about Lucas’s staunch opposition to the colorization of black and white films and how it relates to his seemingly bitter opposition to releasing the original three Star Wars films unenhanced. Yet the movie also shows where Lucas has opened Star Wars up to fans in some key areas. It also makes a great case for how he continues to touch the lives of today’s kids through the films just as he did when we were kids in the early 80s.

All of that being said, I still find that in a slick way this was more about the fans than it was about George Lucas. We hear from a woman who lost her husband and her child because of her Star Wars addiction. We hear people using the phrase “raped my childhood” to describe how they feel about Lucas and the new trilogy. Even as a Star Wars fan, I feel Philippe takes a provocative but subtle look at Star Wars fandom from the inside. It’s one part critique and another part explanation. It exposes over-the-top obsessions while also explaining how this amazing, groundbreaking franchise is rooted in our childhood and has changed many of our lives.

Now I wouldn’t be a proper Star Wars fan if I didn’t throw in my two cents worth. I didn’t hate the prequels. In fact there’s a lot I liked about them and I hold the position that you can always disregard them. But I strongly disagree with Lucas’s decision to keep the unaltered original trilogy from being sold. I dislike much of his tinkering with three films that will always be some of my favorites of all time. There’s no logic or reason behind his decision and it certainly frustrates me. But it doesn’t extinguish the magic of Star Wars. I can still watch the movies and be just as engaged as I was as a young boy sitting in the theaters. I can thank George Lucas for that and that’s something you can’t take away from him. This documentary touches on some of these things. It may seem like it’s taking a side but if you look a little deeper under the surface I think you’ll find a much broader critique that makes for a very appealing film, especially for Star Wars fans.