I’m not the biggest fan of Stanley Kubrick. He has a couple of movies I really like and a couple that I hate. I recognize his talent and filmmaking skills but I’m not always blown away by this storytelling. “The Shining” is one of his films that I like although not near as much as the obsessives we find in the documentary “Room 237”. While I enjoy “The Shining”, I’m not as smitten with it as many are. But the five people we meet in “Room 237” are beyond smitten. They are consumed with the film.

I had read very little on this unsanctioned documentary prior to watching it. I just knew that it was a look at the deeper meanings of what is perhaps Kubrick’s most recognized film. In its own way that’s what “Room 237” is about. But the documentary doesn’t look at popular theories surrounding some of the film’s bigger questions. It more closely resembles far-fetched conspiracy theories thought up through obsessive analysis. I can’t say I left the picture with any new sense of revelation. To be honest I was a little disappointed. It wasn’t at all what I expected. On the flip side there were some unexpected elements in the movie that I found fascinating.

“Room 237” shows the incredible ability of cinema to open itself to a variety of interpretations. It also shows the amazing love that some people have for movies. That’s certainly the case with the enthusiasts we are introduced to here. Not only do each love “The Shining” but their interpretations wildly differ. It really drove home something I’ve always said – movies often speak to different people in different ways. I love the ability to discuss a film and present my interpretation to someone who sees it differently. Movies that give us that have done us a great service. 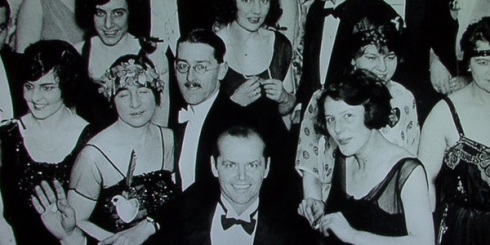 But there is a such thing as letting your obsession run wild and that’s what we get here. One person goes through detailed analysis of how the film is about the “white man’s” genocide of the American Indians. Another firmly believes that the entire film is about the Jewish Holocaust. Yet another believes that Kubrick uses the movie to expose his participation in the faking of the Apollo 11 moon landing video footage. Perhaps the funniest theory is that the film is loaded with subliminal messages that support a subtext involving haunted phantoms and demons who are sexually attracted to humans. Yes, someone actually believes that.

Their impassioned defenses of their theories can be interesting especially when they break the film down frame by frame to offer evidence. But honestly it’s hard to take a lot of their ideas seriously. Their entire argument may hinge on a typewriter, the number 42, or a carpet pattern. They often times point to interesting oversights found in the movie. But their relevance to the theories they’re purporting can be pretty flimsy. That’s where the movie falls a bit short. I can appreciate the passion and near fanaticism that the movie features. But the fact that none of these theories carry much weight makes the documentary feel lightweight. Yes I was entertained, but I was left wanting more.

Close to the end of “Room 237”, a gentleman speaks of his life becoming “The Shining”. He talks about his plans to move his family to a secluded part of the country where he can continue to study the film. What an example of a man’s creepy monomania. These infatuations and enthusiasms are what this documentary is really about. Some are intriguing, most are preposterous. Yet there is still something to be said about this kind of love for a movie. For some of us a movie can deeply stir us and a special love for that film can arise. I think “Room 237” shows that you can take that a tad too far. I just wish this documentary gave me a little more to chew on.