The recent release of the teaser for the upcoming movie “Gravity” got me to thinking about George Clooney and the interesting acting resume he has. So I thought for this week’s Phenomenal 5 I would look back on his career and list the movies that I count among his best. Clooney has his share of detractors and that’s for good reason. But I think he’s proven himself as a fine actor and he’s given us some great performances. Now considering his number of quality movies, I’m not going to call this the definitive list. But these five George Clooney films stand out to me and are most certainly phenomenal. 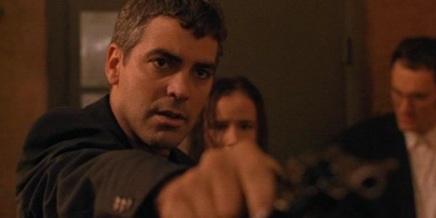 This is one movie in the George Clooney library that’s certainly unlike any other movie he’s made. Up until 1996, Clooney was mainly known as a television actor. But that year he was cast in the Robert Rodriguez and Quentin Tarantino action/horror film “From Dusk till Dawn” and his motion picture career took off. This is definitely not a film for everyone. Clooney plays Seth Gecko. He and his brother Richie (Tarantino) are on the run from the FBI after a bank robbery goes terribly bad. But what starts out to be a crime thriller evolves into something much different. The two find themselves fighting vicious vampires south of the border with the help of a disgruntled preacher (Harvey Keitel). It’s a crazy, violent, and bloody movie laced with dark humor and centered around Clooney’s charismatic breakthrough performance.

On several occasions George Clooney has shown us that he has an affection for off-the-wall humor. This was never more evident than in his three collaborations with Joel and Ethan Coen, the best being “O Brother, Where Art Though?”. This film features all of the signature traits you would expect from the Coen brothers from their quirky humor to their amazing storytelling skills. But it also works thanks to Clooney’s hilarious offbeat performance. The film is set in rural Mississippi during The Great Depression, a setting you wouldn’t expect Clooney to flourish in. But he completely sells it through his wacky accent and lingo along with the Coen’s fabulous script. This is a really good film featuring some of Clooney’s best and most unique work.

In 2007 George Clooney took on what would become one of my favorite roles of his. He played the title role in “Michael Clayton”, a rich and layered drama written and directed by Tony Gilroy. Clooney plays a law firm’s “fixer” who erases and covers any problem that may cause the firm trouble. He finds himself to be expendable during a scandal that turns violent. Clooney is so good here especially in the second half of the film when things really get complex. This is a great performance which ended up earning him an Oscar nomination. In any other year he would’ve won but 2007 was also the year of Daniel Day-Lewis and “There Will Be Blood”. Sorry George, but you still did a remarkable job.

Talk about a movie catching me by surprise! But I should have expected it since it came from the delightful cinematic mind of West Anderson. In “Fantastic Mr. Fox” you don’t see Clooney’s handsome smirk or $500 haircut. Instead it’s his unmistakable voice that we get in this fantastic film made in classic stop-motion animation. It looks sensational. Wes Anderson’s screenplay is smart and witty. And of the wealth of voice talent featured in this film, it’s Clooney who masterfully delivers one great line after another. Now this certainly isn’t his greatest performance since we do only get one facet of his work. But in terms of George Clooney movies, this one ranks close to the top of my list without a doubt.

It may surprise some to see “Up in the Air” at the top of this list but its a movie that really connected with me from the first moment I saw it. There’s so much going on in this Jason Reitman film from 2009 but at its heart it’s all about the characters. Clooney plays a frequent flyer who fires people for a living while doing some motivational speaking on the side. Weird, right? Well there’s such a real quality to this character and it bursts through thanks to Clooney’s performance. We learn so much about him. We despise him. We sympathize with him. The movie is also helped by its spectacular supporting cast. I may be alone but I think “Up in the Air” is George Clooney’s best film and it’s one that will easily hold up in the years to come.

There are five of George Clooney’s best films. So what did I miss? See something you like or dislike? Please take time to chime in. Let me know what your favorite George Clooney film is.