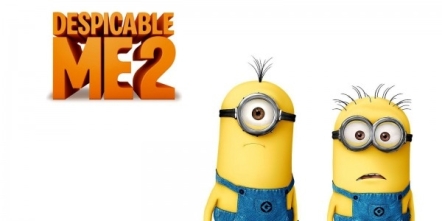 Being the lukewarm animated movie fan that I am, imagine my surprise when “Despicable Me” ended up being one of my favorite movies of 2010. I championed the film, recommending it to anyone who would listen and making my case for how it was considerably better than that year’s animated juggernaut “Toy Story 3”. “Despicable Me” would go on to be a surprise hit eventually earning over $540 million at the box office. Now if that doesn’t guarantee a sequel I don’t know what does.

Well now it’s three years later and this summer we get “Despicable Me 2”. Many of the same people are back this time around including the directing team of Pierre Coffin and Chris Renaud, the writing team of Cinco Paul and Ken Daurio, and of course the voice talents of Steve Carell, Kristen Wiig, Miranda Cosgrove, and Russell Brand. Joining them this time is Benjamin Bratt and Steve Coogan. So all of the pieces are in place for a great sequel, right? The same talented cast and crew and a very successful foundation to build it on. But does it succeed or does it commit some of the same cardinal sins that many sequels have in the past? 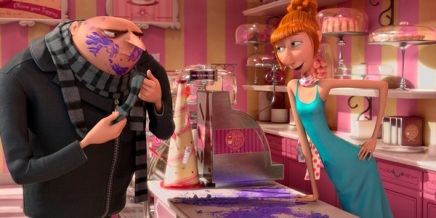 Well I definitely loved revisiting these characters. Gru (Carell) is enjoying his time away from villainy fathering Margo (Cosgrove), Edith (Dana Gaier), and Agnes (Elsie Fisher). The film starts with what’s probably my favorite scene – a backyard birthday party for the unicorn loving Agnes. Here we are quickly reintroduced to the minions. In fact we see a lot more of them in “Despicable Me 2”. It’s pretty clear that the filmmakers noticed the huge popularity of the happy yellow henchmen and gave them bigger roles. Honestly, I was just fine with that. They’re just so darned funny and most of the movie’s biggest laughs feature them. We’re also introduced to Lucy Wilde (Wiig), a perky Anti-Villain Agent. This is a bigger and entirely different role than Wiig had in the first film.

All of these characters are a lot of fun and watching how the story employs them is a hoot. But not every character works so well. Benjamin Bratt voices a mysterious Mexican restaurateur who, weight gags and dance skills aside, never adds much to the film. It’s a pretty important role that was originally set to be played by Al Pacino. But it isn’t Bratt’s work that dulls the character. He’s just so unevenly written. He’s never that interesting and when he’s finally opened up, he doesn’t leave much of an impact. In fact I would argue that he slows things down a bit.

That kind of leads into my bigger gripe with “Despicable Me 2”. In the first film I never felt myself drifting away or struggling to focus my attention. I did here. The middle of the film is full of funny moments but there are also times where it feels like every other animated movie. Its silly slapstick and overwrought dialogue came across as more formulaic than fluid, something I never got from the first picture. 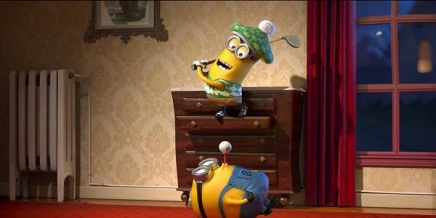 But as I said, it isn’t as if the middle of the film doesn’t have its high points. In fact, the movie itself has several high points. One of the great things about this series is how it surrounds some pretty real and heavy subjects with humor and it does it responsibly. It also features a particular sense of humor that is broad enough for the entire family. I really appreciate that. I love the quirky and offbeat comedy that’s mixed within the usual animated slapstick. Quirky also defines the animation itself. I absolutely love the look of the film, the locations, and especially the characters. Whether it be an accentuated neck, pointy nose, or frazzled hair, many of the characters crack me up just with their look.

But my biggest pleasure is in the heart that this film has. While it does get pushed aside at times, “Despicable Me 2” still has enough of the heart that made the first film such a treat for me. I just wish the movie had kept the same consistency and uniqueness. Still, it’s loaded with laughs and it was great to spend more time in this wacky world with these wacky characters. Minions for life!!!