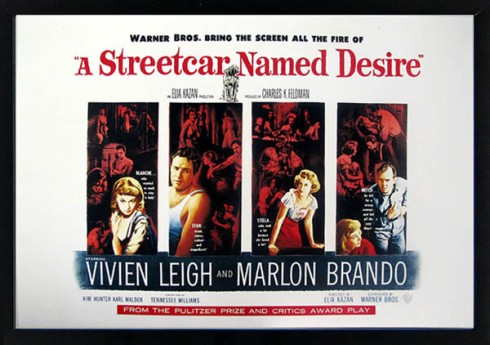 Tennessee Williams first took Broadway by storm in 1947 with his Pulitzer Prize winning stage production “A Streetcar Named Desire”. His dark and dysfunctional story was ripe for a film version and it came in 1951. In order to recapture the success of the play, Warner Brothers brought over several key players from the stage show including Williams to help with the screenplay, the director Elia Kazan, and cast members including Marlon Brando, Kim Hunter, and Karl Malden. The one big change came in the lead role. Jessica Tandy starred in the Broadway show but the studio didn’t consider her a big enough name. Vivien Leigh, who had been working on the London stage version, was brought in to round out the cast.

Leigh plays a southern belle named Blanche DuBois from Auriol, Mississippi. She arrives in New Orleans’ French Quarter to visit her pregnant sister Stella (Hunter) and brother-in-law Stanley (Brando). Stella is happy to see her sister but begins noticing several peculiar things about her. Blanche clings to fantasies of past luxury and prosperity. She still sees herself as a beautiful woman of prominence and stature. But we quickly see it to be a facade that she mixes with heavy drinking in order to deal with deeper buried secrets.

Stanley doesn’t like Blanche from the start and suspects her of holding out an inheritance from the sisters’ homeplace which was meant for both of them. He is brutish and his hot-temper often shows itself in fits of rage. His relationship with Stella is volatile and his physical and emotional abuse is startling. Stella just takes the treatment and keeps coming back to him which her sister doesn’t like. But Blanche has problems of her own which are seeded in some deep emotional baggage and psychological scars. The personality clashes and conflicts between these people is the driving force of the story.

In almost every way “Streetcar” is more theatrical than cinematic. Its Broadway roots show themselves in nearly every facet of the production. It’s a very talky picture that focuses heavily on the actors and their performances. The vast majority of the film takes place in and around a cramped apartment building – a confinement that also resembles a stage production. But these parts are integral components to a story that doesn’t require lavish production designs or location shoots. The well conceived Hollywood studio sets are perfect for creating claustrophobic living spaces that force these characters to deal with one another. Add to it Kazan’s sweat-soaked depiction of the New Orleans heat and you have a grimy and uncomfortable environment that fits the narrative.

“A Streetcar Named Desire” was an Academy Award magnet earning twelve Oscar nominations and winning four of them. Most notably three of the wins were in the acting categories, a first at the time. Vivien Leigh won for her twisted and tormented depiction of Blanche. She was the only one of the main cast members who had not worked together on Broadway. Kazan urged her to use that lack of connection in her performance. Kim Hunter and Karl Malden also won Oscars for their supporting performances. Malden plays a unassuming fellow who desperately wants to love Blanche.

Marlon Brando was nominated for Best Actor but lost out to Humphrey Bogart who won his one and only Oscar for “The African Queen”. What’s interesting is that Brando’s performance is the one that has had the greater impact. This was his second feature film and it introduced his unique and tenacious method acting to a wider audience. Just look at the differences between the acting styles of Brando and Leigh often in the same scene. His performance as Stanley Kowalski displayed an instinctual prowess that would be present throughout his career. He brings such a vivid range of emotions to every scene he’s in. It’s raw but calculated work. Whenever the question is raised about Marlon Brando’s place among the best actors in cinema history, I point people to this performance.

Often heralded as a classic, “A Streetcar Named Deserve” earns its accolades. The Tennessee Williams story mixed with Elia Kazan’s sharp eye and some unforgettable performances cement “Streetcar” as one of the most focused and well made productions you will find. It’s rough, depressing, and unstarched, but it is so potent because of the characters. They are overflowing with energy and life and it is impossible not to be mesmerized by them despite their dysfunction. “Streetcar” made an indelible mark on cinema and it introduced the world to Marlon Brando. How can it not be considered a genuine classic?