I consider François Truffaut’s “Jules and Jim” to be one of the acclaimed French director’s great films. Released in 1962, this movie was one of the pivotal films in the French New Wave movement. In fact, you can’t watch it without sensing that it’s doing something bold and new in terms of filmmaking. There’s such an energy and a freshness in both the technique and in the storytelling itself. More importantly it’s a fantastic bit of cinema that would go on to influence many other films including “Bonnie and Clyde” and “Thelma and Louise”

I really appreciate the filmmakers of the French New Wave. They left an unmistakable mark on motion pictures, and their styles and creative approaches stand out in every film they made. It was a movement of experimentation and of bucking the trends of moviemaking that they believed had grown stale. “Jules and Jim” showcases this in every facet of the movie. It’s playfully neorealistic both in its use of the camera and in its strikingly grounded narrative. But aside from its influential methods and techniques, I found the story itself to be an utterly fascinating look at friendship and the bumpy road that sometimes accompanies it. 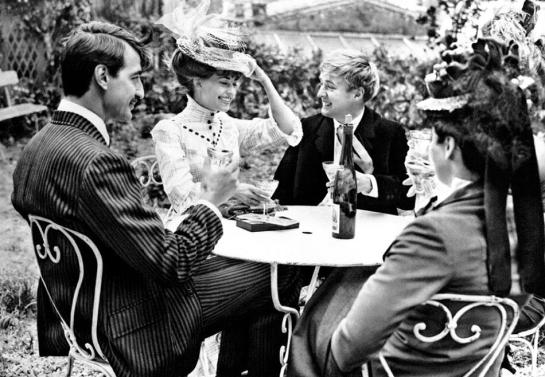 Jules and Jim first meet in Paris in 1912 and they immediately become friends. A narrator whisks us through their early days as young men in Paris and we watch as a foundation is laid for what should be a lifelong friendship. Jules (Oskar Werner) is a shy and reserved Austrian who can’t seem to find the right girl. Jim (Henri Serre) is just the opposite. He’s a confident and outgoing Frenchman whose never had a problem with the ladies. Both enjoy art and poetry and they spend a lot of time just sharing the good things from their cultures with each other. All of their earlier and happier days fly by in the opening few moments of the film but that’s okay. Truffaut is clearly setting the table for the more important part of the story that lies ahead. Yet while brief, these opening moments are beautifully woven together and Truffaut’s camera allows us to perfectly comprehend how close these two friends are.

Through a series of events the two cross paths with the free-spirited Catherine (Jeanne Moreau) who takes their lives down an unpredictable road. Eventually their jobs, a war, and other things separate Jules and Jim, but it’s Catherine who always serves as the new centerpiece to their friendship and it’s the complicated relationship between the three that keeps bringing them back together. Moreau is superb and her character is a difficult one to place. At times she’s energetic, vibrant, and full of life. But at other times she’s disconnected, neurotic, or in states of depression. The different dynamics she brings to her already complex relationships with Jules and Jim makes for incredible cinema.

The twists that the film applies to relationships and love are profound and almost feel experimental. Things take such unorthodox and unconventional turns and they seem destined to end badly. The most obvious casualty would seem to be the friendship between Jules and Jim yet no matter what trial or contention the two face, their loyalty to one another stands. I’m not sure how much sense all of this makes because I’m desperately trying to dance around the details and I refuse to spoil it for anyone. Let’s just say Truffaut takes Jules and Jim down some roads that few people could or would endure.

All of this is told through the lens of a true visionary. Truffaut and other influential groundbreakers like Godard and Chabrol were forging new paths into cinematic storytelling. You see it in every frame of “Jules and Jim”. Truffaut’s camera adheres to no common or popular formula of the time. It’s living and moving and so many times he captures the perfect angle or presents a new technique. It’s the picture of what the French New Wave was all about. It’s such a departure from the traditional moviemaking of the time both in terms of style and story.

“Jules and Jim” may not always be mentioned in the same breath with Truffaut’s own “The 400 Blows”, Godard’s “Breathless”, or Chabrol’s “Le Beau Serge” but it deserves to be considered as one of the French New Wave’s best. It’s a film that’s lively and spirited while at the same time being a bit disturbing and perplexing. There are layers to peel back and new things to discover. In other words “Jules and Jim” offers a wonderful experience both technically and emotionally. Moreover it’s a firm reminder of why we still go to the movies.