There isn’t an ounce of Hollywood spectacle or flash in “Prisoners”. Instead Canadian director Denis Villeneuve (in his American movie debut) creates an intense and methodical thriller rooted in an uncomfortable realism. The story is bleak and unsettling and hope, much like the cold wet weather, deteriorates as the movie takes one emotion turn after another. It’s powerful stuff brought together by an impressive and capable director, a phenomenal cast, and a really strong script.

The story revolves around the abduction of two young girls in a working class Pennsylvania town. The parents, Keller and Grace Dover (Hugh Jackman and Maria Bello) and Franklin and Nancy Birch (Terrence Howard and Viola Davis) go through a whirlwind of ever-changing emotions and developments. Detective Loki (Jake Gyllenhaal) is a determined yet complex officer with a stellar reputation for solving cases. Paul Dano plays the chief subject who has the mind of a 12-year old. Melissa Leo plays his mother. The story features several misdirections and twists, each effecting these characters in an assortment of different ways. 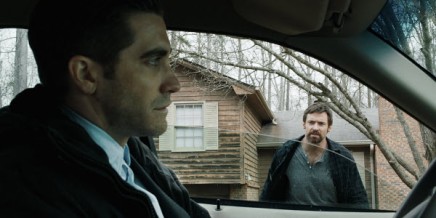 You can’t talk about “Prisoners” without focusing on the stellar cast. Jackman gives the performance of his career. He peels back the layers of conflicting emotion and exposes a vulnerability that I’ve never seen from him. He causes you to feel sympathy for the character while also making you shudder at his actions especially when the chief suspect is released for lack of evidence. I also feel this is some of Gyllenhaal’s best work. I’ve always been mixed when it comes to his acting prowess but he’s so good here. Sporting a threatening neck tattoo and slouchy top-buttoned shirt, you always get the feeling he has some baggage he’s struggling with.

There is also a great sense of place throughout the entire film. The rain, snow, and cold weather plays an ever-present role and the locations set things firmly in a blue-collar Northeastern environment. The great cinematographer Roger Deakins gets a ton of credit for that. His camera seems perfectly in tune with the moods of each scene and he gives us several unforgettable shots. It’s his first work since “Skyfall” and he once again shows that he is a true master of his craft.

“Prisoners” can at times be uncomfortable for a variety of reasons. Of course the child abduction aspect isn’t something anyone is comfortable with. But there is a sly cleverness to how the movie deals with human nature particularly the thirst for revenge. We see how the emotionally compromised can be consumed by their sorrow and resort to terrible things. But is there a time when certain tactics are justified? Are their instances where you would do the same thing? These are interesting questions and the movie lets you decide the answers yourself.

“Prisoners” offers some slick foreboding, crafty twists, and a satisfying ending. An A-list cast masterfully handles the material and the look and tone of the film is just right. The sharp direction works in conjunction with a smart script to create a visceral experience that will stick with you. It does get a tad heavy at times and the running time is a bit long, but it still is one of the better and more intense thrillers of late.