The true story of Louis “Louie” Zamperini is a remarkable one. Zamperini was an Italian immigrant who navigated a troubled childhood to become a record-breaking Olympic track star. Later he fought in World War II where he ended up captured by the Japanese and placed in prisoner of war camps. In “Unbroken” director Angelina Jolie seeks to bring this unbelievable story of life, strength, and perseverance to the big screen.

Tackling movies like this always comes with risks. Many big emotionally-fueled biopics put too much emphasis on melodrama and sentimentality. Some are so systematically polished that they feel like productions instead of intimate stories. “Unbroken” struggles in both regards. Jolie heightens the melodrama through a number of common conventions. We see this mostly in the first half of the film. She also doesn’t shy away from giving us one emotional cue after another whether it be through music or her camera. Also there is no denying that this is a highly polished, by-the-books, prestige film.

The first scene is the film’s best. We meet Louie (Jack O’Connell) as a B-24 bombardier on a bombing run over the Pacific. It’s a tense and well-shot sequence featuring anti-aircraft explosions and Japanese fighter planes. During this time we get our first flashback which patches together a bit of his childhood. He’s constantly in trouble although we never know why. But don’t worry, we get yet another flashback that shows him finding his way by running for his high school track team. This leads to an incredible experience running in the Olympic games.

From there the film spends a lot of time on Louie being stranded at sea and his time spent at various Japanese internment camps. These segments give us several exciting and inspirational moments. But they also bog the film down because Jolie stays at each place too long. Louie’s experience on a raft with two fellow soldiers is harrowing stuff. There are all sorts of dangers and threats they face, but too much time is spent showing them afloat drained by the glaring sun and starvation. 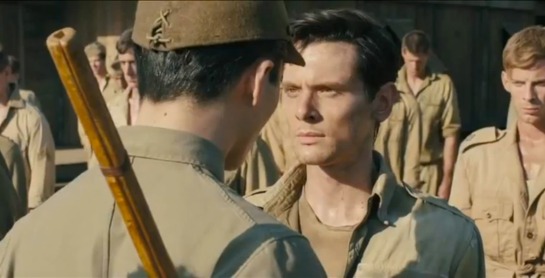 And then there are the prison camps. Again, some tremendous scenes that are genuinely moving and sometimes difficult to watch. Seeing a sadistic Japanese corporal’s obsession with torturing Louie is an uncomfortable but effective experience. But as before we spend to much time there. Jolie pounds us with scene after scene of torture and cruelty and she doesn’t know when to move on or to wrap things up. It’s not that we become numb to what we are seeing, but it does lose its effect as it grows more repetitive. Eventually I found myself checking out.

“Unbroken” is a competent and well-intentioned movie centered around an inspiring true story. Louie Zamperini’s life was something to behold and we get a feel for that in this film. At the same time the movie is undermined by Angelina Jolie’s direction. She has a good visual technique, but her deliberate lingering zaps much of the life out of the film. It runs a good 30 minutes too long and I checked my watch more than once. But I don’t want to write the movie off. If you can wade through these bloated patches there are several things to like. Louie Zamperini died a few months before the film premiered. It’s wonderful to know that his life, first captured in a novel by Laura Hillenbrand, has now been brought to an even broader audience. The movie may not live up to its potential, but it does tell a story that deserves to be told.