Who would have guessed that Robert Ludlam’s trilogy of novels would spawn an immensely popular $1.2 billion movie franchise? That’s what happened with the Jason Bourne series. It began in 2002 with “The Bourne Identity”. Matt Damon and director Paul Greengrass would make three films together. Throw in 2012’s ill-advised “The Bourne Legacy” (minus Damon and Greengrass) and that brings us to 2016 and the latest film, the generically titled “Jason Bourne”.

You could say it is an odd and unexpected return not only of Damon and Greengrass but of the series itself. The Jason Bourne character has lied dormant for nine years yet the new film is essentially a direct sequel to 2007’s “The Bourne Ultimatum”. You would think Greengrass (who also co-wrote the screenplay) had a big vision if he was bringing his lethal, conflicted amnesiac back out of the shadows. Turns out he really doesn’t. In fact, you could say that “Jason Bourne” follows the very familiar franchise blueprint.

But that’s not saying it’s a bad movie. In fact I think a lot of the initial quick-triggered criticisms are undeserved. “Jason Bourne” has many of the same ingredients as the first three films – a good cast, some intense pacing, a handful of impressive action scenes. At the same time it’s tough to overlook the fact that somethings are clearly missing in certain areas of the film.

One of those areas is the story itself. Again, it isn’t bad, but nothing about it feels particularly fresh or original when compared to the past Bourne pictures. Bourne (Damon) is mistakingly implicated in the hacking of a CIA database. The actual culprit is Nicky Parsons (Julia Stiles) who unearths information that puts Bourne on yet another trail to find out more about his past. Hot on his heels is the ‘shoot first’ CIA led by their craggy director Robert Dewey (Tommy Lee Jones) and ambitious head of operations Heather Lee (Alicia Vikander).

Greengrass’ story globetrots around the world and features several interesting locations including Greece, Iceland, Berlin, London, and Las Vegas. You’ll also see plenty of text messages, computer screens, and keyboard tapping. But one thing you won’t see is even the slightest hint of a smile. Every single character is stern, dour, moody, or downbeat. It tends to fit with the tone Greengrass is going for, but I couldn’t help but find the ever-present, super-serious expressions a bit amusing. And don’t think about the story too much. Question marks and plot holes are everywhere. 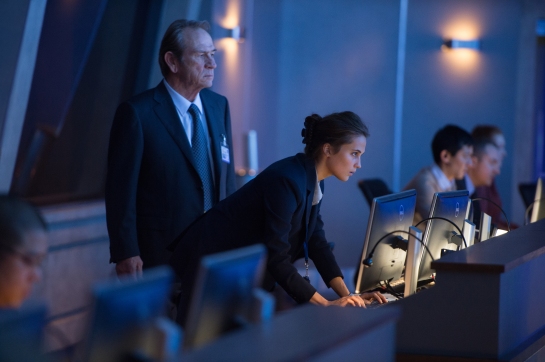 The film sports around three big action set pieces which are overshadowed by the slick, methodical, surveillance-based buildup leading to them. As has become commonplace in many films, the action is hacked to pieces in the editing room. Shaky cameras and quick cuts are disorienting. Perhaps it’s needed for a now older Matt Damon (the Liam Neeson action flicks incorporate the same method), but it’s still annoying. The one exception is the big finale – a fantastic edge-of-your-seat sequence in Las Vegas. Greengrass calms his camera down a tad and gives us an action scene that rivals anything in the first three pictures.

So what to make of “Jason Bourne”. It’s a movie with plenty of the Bourne elements fans will be expecting. It is a bit slow out of the gate, but when it gets its footing it falls right in line with the franchise. But that’s also why the film felt a bit stale and routine. It does nothing to step outside the franchise’s strict established bounds. Ultimately it doesn’t do enough to avoid feeling like a tacked on chapter to the Bourne story. Still a well made and fairly entertaining chapter, but nothing fresh and nothing that reenergizes the series after so many years away.