I saw the trailer for “Pride and Prejudice and Zombies” several times in the theater. The responses from the audiences were always the same – completely quiet until the end when the title popped up. That’s when chuckles could be heard all through the crowd. How can you blame them? It is such an absurdly comical title. It’s also the main reason I was curious to see it.

It surprised me to find this was actually based on a 2009 book parodying Jane Austen’s classic 1813 novel. David O. Russell was originally slated to write and direct  but dropped out for scheduling reasons. A carousel of directors would come and go before Burr Steers took the reins of this wacky project. It’s truly something strange to behold.

PPZ is impossible to categorize. It is a veritable smorgasbord of genres. It could be called several things – a comedy, a romance, a period drama, or a horror picture. As you can imagine some of it works better than others, but just watching Steers try to juggle so many components is entertaining in itself. And the fact that it gets as much right as it does is astonishing. 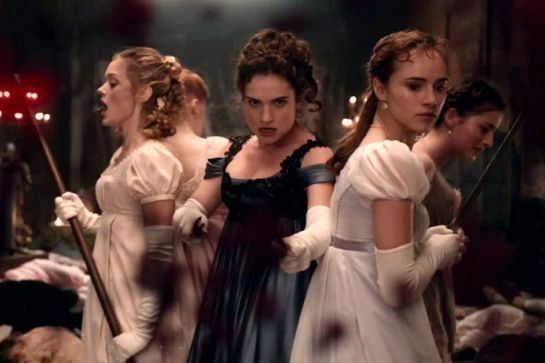 The story goes something like this: It has been a century since a zombie plague ravaged England and the war between folks and flesheaters rages on. Amid this chaotic 19th century world are the Bennet sisters. Living with their parents on the family estate, these five young ladies aren’t your typical prim and proper aristocrats. At their fathers urging, each girl has been extensively trained in the martial arts and in zombie killing. They are just as skilled at wielding a sword as a corset.

Their father (Charles Dance) wants his daughters to be more in tune with weaponry than the kitchen. Their mother (Sally Phillips) wants  to quickly marry them off to the most eligible and wealthy bachelors. The oldest daughter Elizabeth (Lily James of Downton Abbey fame) wants nothing to do with marriage but her sisters are intrigued especially when a handsome young suitor named Charles Bingley (Douglas Booth) moves into the neighborhood.

Elizabeth is the centerpiece particularly her relationships with two very different Englishmen. Her refreshing independence butts head with the mannish arrogance of Mr. Darcy (Sam Riley). Then you have the handsome and noble Wickham (Jack Huston), a soldier who woos Elizabeth with his honesty and charm. It surprised me how much time was spent on this romantic triangle. 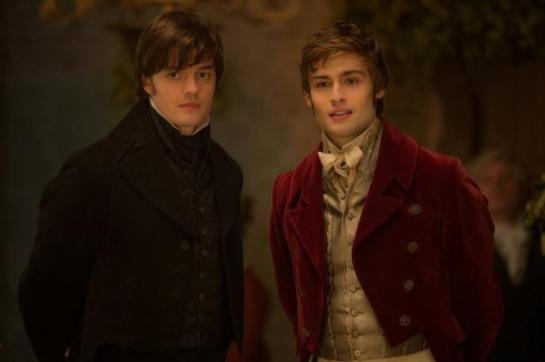 All of this makes for pretty good high society drama and it nails its distinctly English period flavor. In fact it would easily pass for a straight-laced Austen adaptation if not for those other two ingredients – the comedy and horror. There are a few laughs but for the most part the humor is restricted to the absurdity of what you’re seeing and in many ways it and the horror go hand-in-hand.

As for the zombies, they aren’t really a focus and they certainly aren’t scary. They mainly serve as part of the setting. When they do bleed over into the story the movie takes a bit of a dive. We get several scattered injections of zombie violence that is wacky enough to be funny at first but it eventually loses its effect. That is a problem because the film goes to that well too many times.

PPZ is a peculiar movie that reaches out in so many different directions. Sometimes its vision pays off while other times not as much. The Austen-esque drama is surprisingly good in large part because of the well written characters and solid performances. It’s the other stuff that causes the film to stumble. At times it seems unsure about what it wants to be – serious or parody, and eventually the novelty of the clashing tones wears off. By the end it’s simply too wacky for its own good. But don’t be fooled (by my criticisms or the goofy title). This isn’t a throwaway movie. Despite its issues, it is still fun and manages to be more entertaining than it had any right to be.

25 thoughts on “REVIEW: “Pride and Prejudice and Zombies””