Movies have scoured the landscapes of World War 2 telling stories from practically every perspective, or so you may think. Director Ann Fontaine proves that to be false with her powerful and understated French-Polish drama “The Innocents”, a story of a much different kind of wartime horror.

“The Innocents” is written, directed, shot, and edited by women giving it something we rarely get from war pictures – a female perspective. Based on a little-known true story, the film explores a harrowing scenario with seemingly no scar-free solution. At the same time it looks deeper into subjects such as sexual assault, motherhood, and crises of faith.

The story is set in 1945 shortly after the end of the war. Mathilde (deftly played by Lou de Laâge) is a French Red Cross nurse assigned to help in post-war Poland. After reluctantly accepting a nun’s plea for help, Mathilde follows her to an isolated convent where she discovers a young nun in labor. What follows is a quiet, tense sequence where Mathilde performs a cesarean among sisters who are unwilling to divulge details of their unusual situation.

Soon we learn of their horrific secret. The nuns had weathered persecution during the German occupation, but then the Russians arrived. Over a three-day span Russian soldiers repeatedly stormed the convent and raped the sisters resulting in numerous pregnancies. Fearing disgrace and ostracism the sisters rely on Mathilde to shelter their secret. At the same time obvious inner conflicts between their faith and circumstances add an even heavier level of complexity. For Mathilde caring for the sisters while keeping the secret from her Red Cross superiors proves to be difficult. 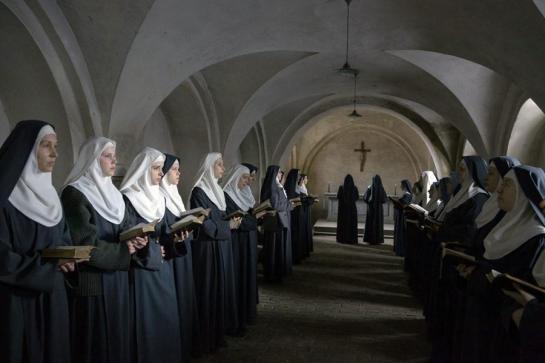 A real strength of “The Innocents” is its even-handed approach to its subject matter. There is no pointed lecturing or judgements about faith, unbelief, or the decisions each influences. Instead Fontaine presents her material with a clear-eyed neutrality. She allows her story and well-defined characters to speak for themselves free of gloss or manipulation. It’s such a vital approach for Fontaine and the writing team to take. I can’t imagine the film having near the punch without its real-world grounding.

Specifically, the handling of sisterhood under stress is thoroughly compelling. Despite the nun’s best efforts, their faith inevitably crashes against the ugly, abrasive world outside their walls. Mathilde is the antithesis – an influence from outside but one representing something good. Her growing relationship with the sisters despite not sharing their beliefs is one of the film’s key undercurrents.

And then there is Caroline Champetier’s cinematography which is something to behold. Shot after shot highlight elements of the period, many resembling classic art pieces. We especially see it in her capturing of the convent. She accentuates its cloistered, bygone look, almost as if it’s from another time. It hearkens back to Champetier’s fantastic work in the slightly similar film “Of Gods and Men”.

As you watch “The Innocents” it’s easy to recognize the many parts seamlessly working together. The smart, measured script, Fontaine’s restrained yet sure-footed direction, Champetier’s beautifully moody cinematography, the wonderful performances by the predominantly female cast (particularly Lou de Laâge). They are all vital in telling this incredibly unique story of courage amid the unimaginable. By the end it was clear to me that no character’s innocence would remain intact, but even the smallest light can offer a glimmer of hope. The film helps us remember that.

11 thoughts on “REVIEW: “The Innocents””