As their bank accounts have blossomed Marvel Studios has shown a confidence and willingness to explore nearly every corner of their comic book universe. Obviously they have spotlighted their biggest properties – The Avengers, Captain America, Iron Man and so on. But they have also ventured into other areas occupied by lesser known characters (to some). Here you find movies like “Ant-Man”, “Guardians of the Galaxy” and the latest Marvel installment “Doctor Strange”.

When watching “Doctor Strange” it doesn’t take long to recognize what has become a familiar origin story blueprint for the Marvel Cinematic Universe. It’s particularly similar to what we got with “Iron Man” and “Ant-Man” – a deeply flawed individual becomes the possessor of great power, he uses said power to face a sizable threat, he gets a measure of self-redemption, and then he is connected to the greater MCU through a an end credits scene. The names have changed and the powers are different, but it’s more or less the same formula. 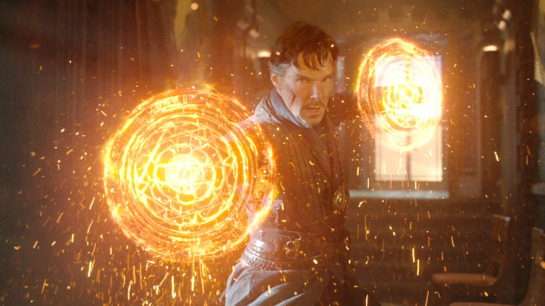 Something Marvel Studios does exceptionally well is cast their movies. Benedict Cumberbatch is the ideal choice to play Stephen Strange, a renowned neurosurgeon with a big IQ and an even bigger ego. After a violent car crash costs him the full use of his hands, he has several experimental surgeries all of which fail. Unwilling to accept his fate, Strange seeks out eastern medicine in Nepal. He meets with a mystic known only as The Ancient One (played by a shorn Tilda Swinton) who shows him he must put aside his intellect and look inward to his spirit, something that’s a bit difficult for a raving egomaniac.

The main antagonist is a fellow named Kaecilius (played with the appropriate amount of gruff by Mads Mikkelsen). He’s actually one of the more compelling characters – a sorcerer who deeply believes that he is acting for a greater good. Other characters include Chiwetel Ejiofor as Mordo, the Anicient One’s right-hand man, Rachel McAdams as Strange’s (sort of) love interest Christine, and Benedict Wong as a faithful soldier/librarian named…well…Wong.

Director Scott Derrickson, most known for his horror movies, was given $160 million which he mostly put to good use. Locations are a highlight with filming taking place from New York City to Hong Kong to Kathmandu. But the film’s bread and butter lies in the special effects which range from merely okay to absolutely astounding. So often Marvel movies focus their effects on blowing up buildings or crashing large objects. “Doctor Strange” offers a new look that deals more with magic and the otherworldly. The visuals look their best when characters distort the dimensions of a cityscape. Think “Inception” but on mystical HGH. Whenever it plays around with the Dark Dimension stuff it doesn’t look nearly as impressive.

Also in line with other Marvel movies is the humor. The MCU has wisely refused to take itself too seriously and the same applies here. The humor comes from a number of sources but most prominently from an inanimate object. The Cloak of Levitation is easily the most recognizable piece of Doctor Strange attire. Here it functions semi-autonomously and some of the movies funniest scenes involve the cloak running around with a mystical mind of its own. There are also a few clever lines where the film understands its absurdity and winks at the audience. It’s a much-needed ingredient.

“Doctor Strange” seemed like another wild stretch by the MCU, but if early box office numbers are an indicator they have another success on their hands. There are definitely some new things being done here most notably in the visual effects. The ending is also a nice diversion from the routine MCU formula. On the other hand, this is a Marvel origin story through-and-through which is getting a little tiresome even for a bonafide comic book fan like me.