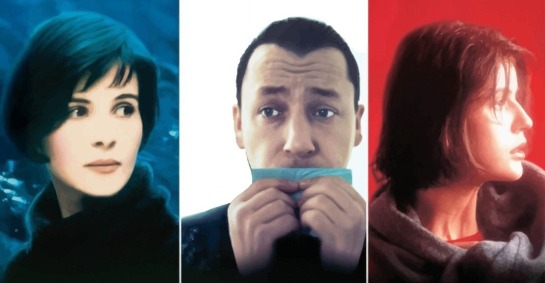 Krzysztof Kieślowski was at a pivotal point in his life while making his renowned Three Colors trilogy. He had determined that these would be his last movies and at the conclusion of his trilogy he announced it to the world. It was 1994 and Kieślowski was at the pinnacle of his career. Yet he stepped away from filmmaking with the intent of sitting at home and smoking while never ever visiting a cinema again. Sadly, Kieślowski would die two years later at the age 54. A true artist driven by his own rules right to the end.

Kieślowski’s Three Colors trilogy couldn’t be a better send off – a testament to a visionary’s passion for creating movies that burrow deep into the human elements that unite us. Kieślowski once said he preferred “touching on subject matters and situations which link people, and not those that divide people.” While he often spoke to the social and political climates of his times, they were too divisive and rarely his focus. He later said “Feelings are what link people together.” That very idea permeates ever frame of his Three Colors movies.

The trilogy’s name is taken from the three colors of the French flag – blue, white, and red. Each of the flag’s colors represent a particular ideal. Blue stood for liberty, white for equality, and red for fraternity. Each movie represents one of these ideals but on a human level and never within a political framework. Politics tend to divide and that was of no interest to Kieślowski. He sought to examine these principles within the confines of individual lives and all of the love, sorrow, pain, and humor that come with living. These are feelings and emotions that we all know and can connect to. All three films, while able to stand on their own, do connect in subtle and sometimes surprising ways.

With “Red”, the final film in the Three Colors trilogy, Kieślowski saves his best for last. While pulling some elements from the previous two movies, “Red” still feels strikingly unique both in look and tone. It probably has the most obvious relationship with the ideal it represents (fraternity), but that doesn’t mean it’s free of thematic exploration and nuance. Quite the obvious. Kieślowski rarely looks at his subjects literally meaning we get plenty to meditate and chew on.

“Red” features a fairly straightforward story but with a sense of mystery and wonderment. There is also a surprising amount of warmth that we don’t see in the other movies. “Blue” was cold in much of its dealings with isolation and separation. The coldness in “White” comes in the form of a broken relationship and a jilted husband’s desire for revenge. “Red” has some of the same but it slowly and steadily moves towards the warm glow of fraternity yet not without facing the quandaries of life Kieślowski loves to contemplate.

Irène Jacob plays Valentine, a university student and part-time bubblegum model living in Geneva. While driving home one night she hits a German Shepherd with her car. The address on the collar leads her to a reclusive ex-judge named Joseph Kern (Jean-Louis Trintignant). Their initial meeting doesn’t go well. The soured, callous Joseph seems to care nothing about his dog and even less about Valentine. Eventually the loneliness they both share sparks a compelling bond between the two.

“Red” is a film that deals with fraternity but it’s also about miscommunication and missed connections. We see this in Valentine and Joseph’s central relationship, but there are other ways the film emphasizes it. For example, a law student named Auguste (Jean-Pierre Lorit) lives in the apartment building next to Valentine’s. The two cross paths every day yet never once seem to notice each other. Both are in less than perfect relationships, Valentine with the smug domineering Michel who we only hear over the phone, and Auguste with the flirty Karin (Frederique Feder). Both have an avenue for a potentially better relationship but constantly miss the connection.

Kieślowski thoughtfully unwraps these people through their circumstances and intersects their stories in some unexpected ways. As he does so he challenges us to empathize with his characters and delve deeper into their motivations and feelings. This was common for Kieślowski whose true desire was to portray not merely what we see with our eyes but what we sense. This is so evident in his effective uses of each title’s color. In “Blue” it was moody and somber. In “White” it was often more naturalistic and at times idyllic. But in “Red” it conveys a number of feelings while also provokes our senses in a variety of ways.

“Red” is a mesmerizing and engaging experience right up to its peculiar but perfectly fitting ending. It connects itself to the previous two film but at the same time continues the trend of being surprisingly unique. All three movies have managed to be within the same world but strikingly different in terms of story, tone, aesthetic, and meaning. “Red” is a superb way to bring the trilogy to a close and it’s particularly moving in that this was the final movie Kieślowski would ever make. In “Red” he left us with an exclamation point on a fabulous career and a firm reminder that his work stands among the best of his craft.