“Lion” may best be described as a true account of two extraordinary, life-changing journeys experienced by young Saroo Brierley. That description gets to the  meat-and-potatoes of this moving, inspirational drama from first time feature director Garth Davis. And regardless of how hard you try, you’ll have a tough time leaving the theater dry-eyed.

“Lion” is adapted from Brierley’s memoir titled “A Long Way Home” which chronicles his separation from home as a young boy and his intense emotional struggle to reconnect as a young man. Australian poet and novelist Luke Davies wrote the screenplay which provided a series of unique challenges. From handling cultural shifts to avoiding the common trappings of highly emotional material, he and Davis masterfully present this complex tale.

The film divides Saroo’s life into two parts. The first features him as a 5 year-old boy living in a poor remote village outside of Khandwa, India. He’s portrayed through an astonishing performance by newcomer Sunny Pawar. Saroo’s mother (Priyanka Bose) collects rocks to provide food for her children while Saroo helps his older brother Guddu (Abhishek Bharate) doing menial jobs for change.

While in Khandwa for a week-long job Saroo is separated from his brother at a train station. After waiting for Guddu to come for him, Saroo mistakenly boards a train which takes him 1000 miles away to Calcutta. Once there the film confronts a number of issues through young Saroo’s eyes – the plight of street children, child trafficking, poverty, and even adoption which we see when Saroo is taken in by John and Sue Brierley, an Australian couple played by David Wenham and Nicole Kidman.

20 years later Saroo (now played by Dev Patel) is leaving home to study hotel management in Melbourne. There he meets and falls for a fellow student named Lucy (Rooney Mara). As they dine with a group of Indian friends Saroo is hit by a rush of memories and emotions. With his friends encouragement he begins to track down his birthplace through flashes of memories and Google Earth. But every dead-end compounds his pain and intensifies his longings to know who he truly is. Perhaps Saroo describes himself best when he simply states “I’m lost”. 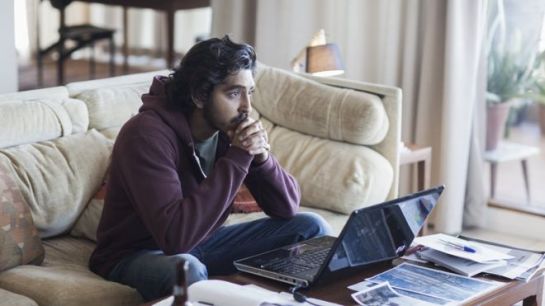 Watching “Lion” is like taking in two dramatically different movies yet there is a powerful human connection that links them. Young Pawar’s segment is both harrowing and heart-breaking. Davis’ camera often has us seeing things from Saroo’s perspective which adds an extra layer of distress and concern. He doesn’t overplay it nor does he feel the need to manipulate his audience by embellishing the peril. When Patel arrives the film becomes much more internal, at times even meditative as older Saroo not only wrestles with his identity crisis but also helplessly watches the effects it has on his relationships.

The final act wrings out every ounce of emotion left, but it feels honest and earned considering the journey we’ve taken. Aside from one slightly underserved relationship and the film drifting a tad in the second half, “Lion” eloquently handles this incredible multi-layered story. Patel’s leading man star has never shown brighter. Pawar is a delightful discovery. A quiet, understated Kidman melts into her character. It’s also a beautifully shot first feature from a director worth keeping an eye on.