Kamini Zantoko (known simply as Kamini) is a French rapper of Congolese decent who became an internet sensation with his music videos depicting life in rural France. His first single was 2006’s “Marly-Gomont”, a song about growing up in a small Picard village of the same name. The humor-filled rap was actually based on Kamini’s life experience. As a young boy his father moved him and his family to Marly-Gomont to become the town’s doctor.

The influence of Kamini’s experience extends beyond rap tunes and music videos. It also drove him to co-write the script for the 2016 comedy-drama “The African Doctor”. It tells the story of Kamini’s father Seyolo Zantoko (portrayed by Marc Zingo) who is the only African graduate from his French medical school. Seyolo turns down a lucrative job in his home country and accepts one in the small all-white village of Marly-Gomont. But Seyolo and the desperate town mayor who hired him underestimate the backlash from the townsfolk who can’t shake their own ingrained prejudices.

Director  Julien Rambaldi (who also co-wrote the script with Kamini) examines this social quagmire through two intriguing narrative threads. The first is the most obvious – the plight of a black family trying to integrate into a narrow-minded, all-white community. Seyolo’s plan is to simply endure the initial discomforts and win over the villagers. But the fears and prejudices he and his family face are significant and at times overwhelming.

The other thread centers around Seyolo’s bull-headed vision for his family. In his mind his desire for French nationality and better education for his kids can only be accomplished through the Marly-Gomont job. It’s an interesting position that subtly speaks to the lack of opportunity available at that time. But it also creates a wall between this genuinely loving father and his family. His insensitivity towards the pressures and persecution they are enduring threatens to tear them apart.

Seyolo’s wife Anne (wonderfully played by Aïssa Maïga) is smothering in loneliness and dreams of moving to Paris or Brussels. With her family in Africa and no friends in the village, her patience is paper-thin. His daughter Sivi (Médina Diarra) is a soccer prodigy but prohibited from playing on her school’s team first because she’s a girl and second because her father feels soccer is a waste of time. Young Kamini (Bayron Lebli) is a smart well-behaved boy who is forced to face racism for the first time at his new school. Yet Seyolo is impervious to their struggles. 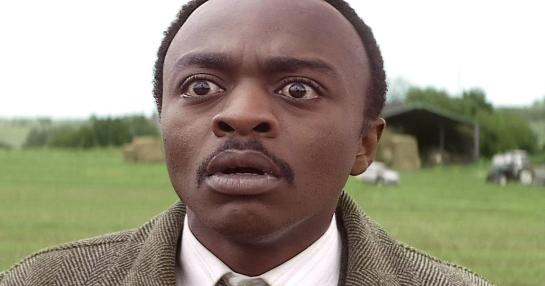 Considering all of that it’s hard to envision this as anything other than a heavy, troubling social drama. Actually it’s a very funny film that often puts a humorous spin on the absurdity of the ignorance on display. The village has its assortment of oddballs that add some good laughs while feeding the central conflict. Some may find this to be too lighthearted of an approach considering the topic, but I never lost sight of the seriousness amid the comedy. And I trust Kamini’s first-hand experiences enough not to view this as a sugar-coating.

“The African Doctor” is a quirky movie with a good sense of humor, a better message and a lot of heart. The balance of comedy and biting social drama is well-managed though it may not impress those looking for a more serious, aggressive take to the subject matter. But I would argue there is a lot of meaning packed into this film and the approach it chooses to take suits it just fine.