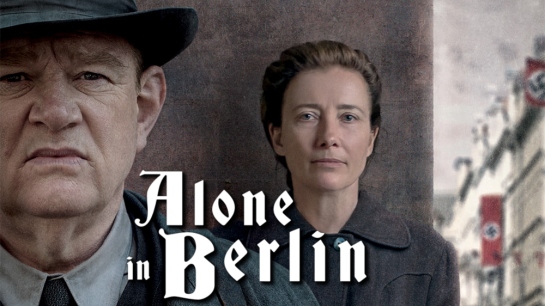 For me the strengths of Vincent Perez’s “Alone in Berlin” are fairly obvious – a unique and heart-wrenching true story and two superb acting talents as its leads. That was more than enough the keep me attached to this slow-boiling World War 2 drama.

Brendan Gleeson and Emma Thompson play Otto and Anna, a German husband and wife living in 1940 Berlin. The two are devastated upon receiving the news that their only son Hans is killed during battle. His death puts stress on their already dry marriage and each mourn in their own lonely way. But their loss also gives them a new perspective on the growing war unfolding around them. 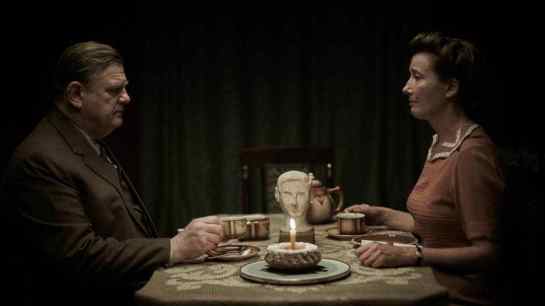 As the Nazi influence begins to reflect across Berlin the couple witness things that intensify their repulsion and disillusionment. Otto begins writing anti-Nazi messages on postcards and secretly leaving them all around the city. At first it’s a therapeutic emotional release to help him cope, but soon it also becomes about duty. And when Anna joins him, their dangerous quest expands while also bringing them closer together as husband and wife. It gets even riskier when the Nazi’s hire a principled German police detective (Daniel Brühl) to track down those responsible.

First the performances, it should surprise no one that both Gleeson and Thompson are wonderful. Gleeson conveys the emotionally worn Otto through his tired, somber eyes and dispirited mannerisms. Thompson portrays Anna as a determined woman but one who clearly feels the weight of her sorrow. Their performances are so rich and grounded that you never doubt either character or any of their motivations. Brühl is also good in a role that he has played before.

For the most part the story steers clear of depicting the war’s atrocities. They are mostly handled from a distance. But in the handful of scenes where they do hit the screen, the impact is effective. Some who yearn for a harsher visual representation of the horrors may find Perez’s film too sanitary. It’s a response I’ve seen towards other films that sought to tell a more confined, individual story. I don’t agree. Perez keeps his focus on his two central characters and the film is better for it.

One gripe is that the film moves a bit slow at times and it often relies to heavily on its two leads. But that doesn’t make it any less inspirational and heartbreaking. “Alone in Berlin” tells a poignant story that is unique and authentic. As a fan of films set in this period, I was plenty satisfied with what Perez and company deliver and hopefully more people will give it a look.