As a movie fan here is a scenario I have experienced more than once: I see a trailer for a big studio picture and immediately say to myself “This movie is in trouble”. Then I learn of its $175 million production budget and I say “Make that BIG trouble”. And then critics begin dropping a slew of scathing reviews (not always a guaranteed indicator but in many cases…). Needless to say my expectations bottom out.

But then I actually see the film and it turns out to be far from the horrid experience I expected. “King Arthur: Legend of the Sword” fits into this category. Now don’t get me wrong, this isn’t a ringing endorsement. At the same time it’s far from the unwatchable dreck I was led to expect. 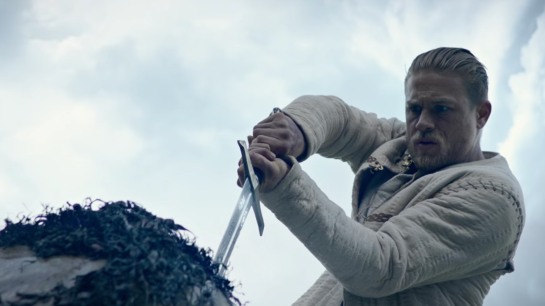 Where to start? Guy Ritchie’s take on the Arthurian legend doesn’t follow many traditional guidelines. You could say (for better or for worse) Ritchie does his own thing. That’s good in the sense that it feels like a unique undertaking and the looniness is one of my favorite things about it. What’s not so good is that it misses much of the mythical and magical charms that has made the story somewhat timeless.

Since 2004’s forgotten and underrated “King Arthur” Warner Brothers has been hard at work attempting to bring a new film to light. They finally settled on what is supposed to be the first of a six film cinematic universe. The likeliness of that happening has dwindled. Something about losing $15 million will do that.

The film begins with Camelot under siege by the dark mage Mordred. It’s a sequence resembling a cheaper version of Peter Jackson’s battle for Minas Tirith (see “Lord of the Rings: The Return of the King”). King Uther Pendragon (Eric Bana) prevails much to the chagrin of his ambitious and devious brother Vortigern (Jude Law). Hungry for the throne, Vortigern leads a coup against his brother. Realizing the peril, Uther sends his infant son Arthur drifting down the river, baby Moses style. Then through a speedy time-hopping sequence we learn young Arthur was found by a group women and raised in their brothel.

What follows is a gonzo account of Arthur’s rise, his introduction to Excalibur, and of course a confrontation with the new king Vortigern. Charlie Hunnam plays Arthur, now all grown up and with a fantastical and unwanted destiny laid out before him. Hunnam is a good actor but here he seems a bit hog-tied by the script. It’s steadily working towards him becoming the mythical sword-wielding hero, but for too long it keeps him locked in as the reluctant denier.

The action is pretty good and Jude Law is a hoot playing such a detestable slug of a human being. And the sheer nuttiness of the whole thing works in several regards. Despite its noticeable flaws, before I knew it I found myself having fun with this gonzo vision of Camelot. But is it enough to put things in motion for a full cinematic universe? I’m afraid not. It’s entertaining as its own thing, but there isn’t much to draw anyone back for another dose. Like I said, not a ringing endorsement but fun enough.

31 thoughts on “REVIEW: “King Arthur: Legend of the Sword””