Few modern filmmakers capture my attention quite like the Dardenne brothers. It’s not due to some pronounced signature style or showy big budget crowd-pleasing. Instead it is the undeniable naturalism that is found in each of their movies. Their stories are true to life and delve into an assortment of moral conflicts all while remaining free of narrative gimmicks or shiny Hollywood gloss.

Luc and Jean-Pierre’s latest “The Unknown Girl” checks all of the above boxes. It’s story revolves around a young doctor named Jenny. She’s played by Adèle Haenel whose striking performance comes across as almost Bressonian. It’s quiet yet at the same time it brims with intensity, not from any thundering dramatic force or narrative machinations. Instead it comes from the sheer authenticity of the performance. 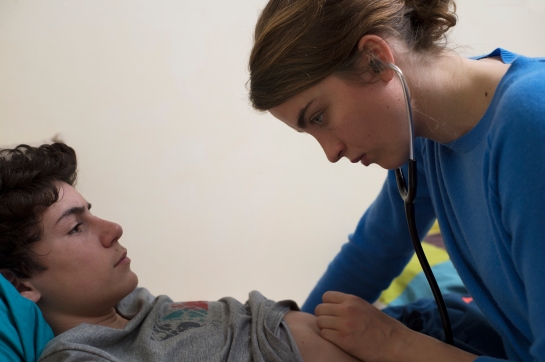 Jenny works at free clinic in a blue collar neighborhood but has recently been accepted to a lucrative doctors position with a prominent medical group. With her career and future set, Jenny finishes out her final days at the clinic treating familiar patients and training an insecure intern named Julien (Olivier Bonnaud). Late one evening the buzzer sounds at the front door as Jenny and Julien prepare to leave for the day. Already an hour past closing time, Jenny chooses not to answer it – a decision that will come back to haunt her.

The next day Jenny learns that an unidentified immigrant teenaged girl was found dead nearby. The clinic’s security cameras reveal that it was the girl who had frantically rang the buzzer the night before.   Jenny is shaken by the news and by the guilt of her own negligence. In a quest for atonement Jenny sets out to discover the girl’s identity and to find out what happened to her.

For Jenny it becomes an obsession rooted in finding justice for the young woman but also in obtaining some semblance of personal closure. The Dardenne’s use her obsession to dig deeper into the weakened economic and social structure of Liége, Belgium, a field they have plowed numerous times before. The brothers have always had a keen sensibility towards working-class issues and plights. Here it’s explored through every location Jenny visits in her search for information. We also see it in the various lower-income patients Jenny sees. Some are dealing with social service cutbacks, some with illegal documentation, even addicts wanting fake prescriptions. None are glorified or demonized. They are simply observed through an real-life lens.

A bit more about Adèle Haenel. Her performance and its importance to the film cannot be overstated. She is in practically every frame of the movie and there is such an emotional subtlety in her portrayal. It makes sense. She once tells Julien “A good doctor has to control his emotions”. But the further her search for answers goes she finds it harder to abide by her own rule. Also, despite her one moment of compromise, Jenny is a true organic heroine. It’s seen in her heartfelt desire to identify the girl and in the compassion she has for every patient she sees. Haenel makes it real for us.

“The Unknown Girl” certainly has its place in Luc and Jean-Pierre Dardenne’s catalog. As with their past films, its potency comes from its firm anchor in reality. We get thoughtful scrutiny of the medical, economical, and social systems without being preachy or heavy-handed. Instead the Dardennes simply depict true life and allow it to speak volumes. That’s the cinematic world they work in and Adèle Haenel fits beautifully on their canvas.