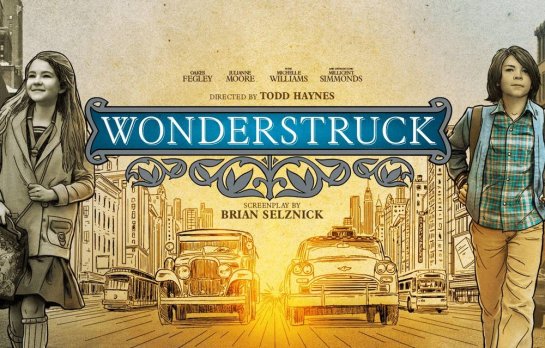 It would be wrong to write off Todd Haynes’ delightful “Wonderstruck” as just a kid’s movie. Aside from being terribly reductive, that perspective shortchanges what is a beautifully crafted story and a striking two-headed visual composition that packs one heck of an emotional punch.

“Wonderstruck” is based on the 2011 Brian Selznick novel of the same name. Selznick had previously written “The Invention of Hugo Cabret”, a book adapted to screen by Martin Scorsese (“Hugo”). He also wrote the screenplay for “Wonderstruck” (his first) which is a cleverly layered puzzle featuring two intersecting stories set 50 years apart, the first in 1927 and the other in 1977.

The film starts in 1977 rural Minnesota. A young boy named Ben (Oakes Fegley) lives with his aunt, uncle, and cousins after the tragic loss of his mother (played via flashbacks by Michelle Williams in a small but delicately moving performance). To make matters worse, he loses his hearing in a freak lightning accident. Ben’s longing to know about his absent father existed before his mother’s death. He finds a mysterious book kept hidden by his mom with hints of his father’s life. He sneaks away and embarks on a quest to find his father in New York City – an entirely new world to a small town lad.

A parallel story is set in 1927. A young deaf girl named Rose (played with an infectious sweetness by deaf actress Millicent Simmonds) lives in New Jersey with her strict and abrasive father. Much like Ben she is longing for a parent – in her case it’s her mother (Julianne Moore), a Broadway prima donna more interested in the limelight than her family. But with innocent, childlike naïveté she runs away to New York City in hopes of tracking down the mother who has been away for so long.

Todd Haynes deftly hops back and forth between these two braided adventures, one never losing its flow to the either. To make it even more impressive, an incredible amount of detail is poured into the individual stories making each feel of its time. Cinematographer Edward Lachman is a true star of the film. He shoots both stories with drastically different styles. Rose’s is shot in gorgeous black-and-white while Ben’s features a color palette pulled directly from the 1970s.

Other things breathe life into the vastly different periods. The costume design is top-notch and it’s given a lot of attention. There is also the way Haynes and company visualize the differences from one era to another economically but also in diversity. And then you have Carter Burwell’s score which is plentiful but never intrusive. It’s especially critical in Rose’s story which is entirely framed as a silent picture. Just as effective to the 70s vibe are the cool musical injections of David Bowie, Rose Royce and Sweet.

As mentioned Rose’s portion of the story is presented as a silent picture. It’s seen in how the scenes are shot and in the steady, mood-setting orchestration. But it also fits the narrative of a young girl who has been deaf her entire life. It offers a sense of perspective and it’s done with grace and thoughtfulness. And over and over the camera captures Simmonds delicate smile and her constant gaze of wonderment. Counter that with Ben’s world rich with big city sound. Only recently deaf, the sounds are still real to him even though he can no longer hear them. His struggle with that is one of the more poignant aspects of his story.

Eventually the two tales connect in a way that could have leaned heavily on overwrought sentiment, but that’s not the case at all. Instead it’s an emotionally justified solution to an exquisitely conceived cinematic puzzle. It’s an ending that feels right for a film that is this earnest. And let me say again this isn’t just a kid’s movie. It’s a very human movie that not only touches your heart but reminds us of why cinema is such an extraordinary form of storytelling.