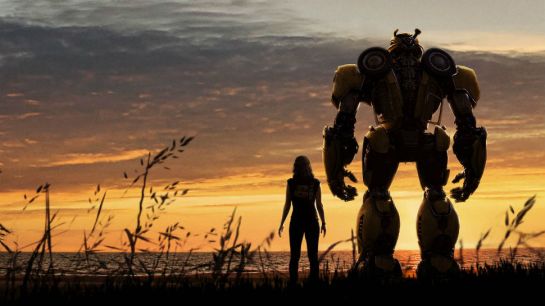 If you’re like me the very notion of a “Bumblebee” movie was easy to dismiss. I have been numb to the Transformers movie franchise since its second installment 2009. For me the movies spiraled into the kind of blockbuster I generally push back on – tons of CGI-fueled spectacle but barely a shred of story or character substance to sink your teeth into.

Then along comes “Bumblebee” and several things automatically grab your attention. For starters it’s the first Transformers film not directed by Michael Bay. Second, it stars a really good young actress in Hailee Steinfeld. Lastly, the movie is currently sitting at 93% on Rotten Tomatoes. That was just enough to lure me into letting my guard down and actually going to the theater.

“Bumblebee” is both interesting and surprising – a prequel to the 2007 original film and far more intimate and clear-eyed than any of Michael Bay’s concoctions. It’s the second film from director Travis Knight, his first being the exceptional “Kubo and the Two Strings”. He and screenwriter Christina Hodson place a heavy emphasis on character which gives “Bumblebee” an emotional pulse missing from the franchise’s other installments.

As civil war rages on his home planet, Autobot soldier B-127 (later named Bumblebee) is sent to earth by leader Optimus Prime. His mission is to covertly establish a resistance base while protecting the planet if their enemies the Decepticons happen to show up. Bumblebee lands in 1987 California but has to fend off a testy government agency captained by John Cena and even worse a Decepticon who tailed him to Earth. Bumblebee survives the encounter but ends up seriously damaged, unable to speak and with a broken memory core. As a result he helplessly takes the form of a Volkswagen Beetle and shuts down.

Steinfeld’s Charlie is a bit of an outcast only days away from her 18th birthday. She still grieves the loss of her father and has been unable to move on like her mother (Pamela Adlon) who has since remarried. Charlie’s life is a perpetual state of disappointment and frustration whether it’s her downer job at a local carnival or she’s trying to fix up an old car she and her dad worked on together. She finds a glimmer of purpose in a dusty yellow Volkswagen Beetle (guess who) she discovers in her uncle’s junkyard.

While working on her new ride Charlie inadvertently wakes Bumblebee and in the process emits a signal quickly picked up by the Decepticons. The two quickly form a bond which Knight smartly spends a lot of time on. Both characters share a similar lostness but find a much-needed comfort in their relationship. This could have been an easy misfire but Hodson’s script has a legitimate heartbeat. It’s sweet and surprisingly tender without ever turning to mush. And Steinfeld is such a good actress either in the film’s softer moments or once the inevitable threat eventually arrives.

Other things that work – the movie’s sense of humor. Most of the Transformers films have tried to incorporate some level of humor. Here it comes from a better and more digestible place. It’s far from the crude and obnoxious nonsense several of Bay’s movies would peddle. “Bumblebee” also leans heavy into its 80’s setting. There are fun little 80’s nuggets spread throughout the film (who else remembers Mr. T cereal?) and the soundtrack is a blast.

As for what doesn’t quite work – while I did fall for the 80’s vibe there are moments where it is glaringly on-the-nose especially with the music. This is most noticeable in the first half (admittedly I still got a kick out of it). And then there is John Cena who inevitably pops back up as the misguided government antagonist. The character isn’t well written to begin with, but Cena doesn’t really help matters. He’s a bit is stiff, cheesy and often too cartoony to be taken seriously.

I realize calling “Bumblebee” the best film in the Transformers franchise isn’t much of a compliment. So let me try this – “Bumblebee” is a good spin-off that easily stands on its own unique merits. It’s able to dodge nearly every comparison to the more abyssmal of Michael Bay’s efforts while also giving us hope that the franchise can offer something worthwhile. The question becomes is it a case of too little too late?