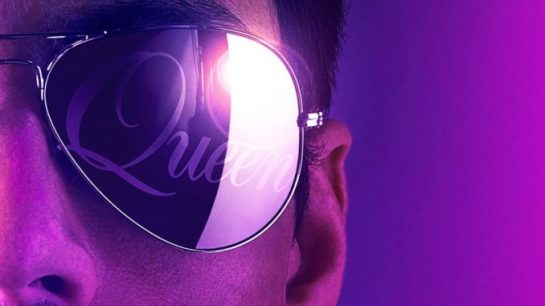 When you think of rock-and-roll biopics it’s hard to come up with a better subject than the incandescent and enigmatic Freddie Mercury. As lead singer for the legendary British rock band Queen, the wildly flamboyant Mercury became a household name across the globe. He would perform with Queen for over 20 years until his AIDS-related death in 1991. He was just 45.

“Bohemian Rhapsody” sets out to tell the story of Freddie Mercury starting around the time Queen was formed in 1970 and finishing up with their famous twenty-one minute Live Aid performance at Wembley Stadium in 1985. In between it hits on a several significant moments in Mercury’s life while making up a few of its own. The results are a by-the-numbers musical biopic that feels pretty basic despite the compelling character at its center.

The embattled Bryan Singer handled the bulk of the direction before being fired due to constant no-shows and clashes with the cast and crew most notably the film’s star Rami Malek. Dexter Fletcher replaced Singer with around two-thirds of the movie shot and ready for post-production. I’ll let others figure out which one deserves the most credit and/or the most blame for how things turned out.

Rami Malek is easily the film’s biggest strength. He seamlessly maneuvers between the two sides of Freddie Mercury – the shy and intensely private man and his garish, energetic stage persona. He deftly unveils Mercury’s quiet sensitivity and insecurity. But even more impressive is watching Malek lose himself onstage, perfectly reflecting Mercury’s rock-and-roll alter-ego. Whether strutting charismatically or belting out (kinda) classics with a four-octave range. It’s amazing to watch.

Mercury is very much the centerpiece to the point where the rest of the band almost gets lost in the background. It’s a shame because the movie is best when viewed as a simple celebration of their music. The very best scenes are when the band is together fighting over and making music. That includes a fabulous final twenty minutes which recreates Queen’s Live Aid concert performance and perfectly captures the band’s remarkable chemistry and energy.

But the movie struggles when the focus is solely on Mercury. The filmmakers make several weird omissions and peculiar changes to his timeline. In the film’s most glaring bit of fiction an arrogant and selfish Mercury, enamored by his own stardom, breaks up Queen to pursue his solo career. In reality Queen never broke up. It’s a needless demonization. There is an attempt to representation Mercury’s descent into the grips of drugs and debauchery. It gets the message across but isn’t what I would call enlightening.

So with “Bohemian Rhapsody” you end up with a very safe and conventional biopic that aims more at being a crowd-pleaser than an in-depth character exploration. When viewed in that light it’s a pretty enjoyable film. Malek is fantastic as is most of the supporting cast (Gwilym Lee’s resemblance to Brain May is uncanny). And while I learned nothing new about Queen or Freddie Mercury, the movie concentrates enough on the music to make it worthwhile.