It’s really hard to believe, but it has been 25 years since the late great John Candy passed away. I have and will always have a soft spot in my heart for Candy. He hit the big screen and rose to his peak during my youth. In other words I grew up watching his films and his lovable assortment of characters. Today we are looking at five of his best roles. As always I wouldn’t call this the definitive list, but there’s no denying that these five John Candy characters are nothing short of phenomenal.

Okay, I fully admit to there being a sentimental tug deep within me to put this film on the list. I’ll be the first to admit it’s not a great movie and some of the gags will leave you cringing. But Candy also delivers some big laughs playing a bumbling private investigator ineptly trying to solve a kidnapping case. When he’s tapping into that classic Candy personality, Harry Crumb is at his best.

In this John Hughes ‘summer vacation gone wrong’ movie Candy and his family rent out a cabin at a lake resort only to have it crashed by his obnoxious brother-in-law Roman (played by Dan Aykroyd). Candy’s Chet is the film’s lovable punching bag which is something Candy could do in his sleep. Chet is goodhearted but gets caught up in trying to one-up the annoying Roman. Some good laughs follow. 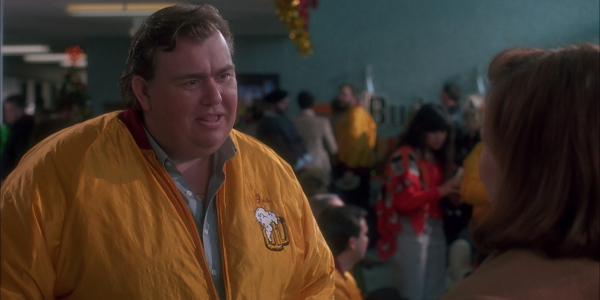 While John Candy had numerous starring roles, some of his memorable characters can be found in small supporting parts. Take Gus Polinski in “Home Alone”. I still crack up every time I hear Gus introduce himself as “The Polka King of the Midwest”. And don’t forget his band the Kenosha Kickers. “Very big in Sheboygan.” This is signature Candy – awkward, lovable, and genuinely hilarious.

I mean come on, Buck Russell had to be included, right? This is John Candy fully tapping into what made him such a fun and enjoyable actor. Desperate and out of options, Buck’s brother and sister-in-law reluctantly ask him to watch their three kids who he has barely met. He hits it off with the youngest two but not so much with the rebellious teenaged daughter. Turns out Buck is willing but ill-equipped for keeping kids which makes for some of Candy’s very best movie moments.

Of the several great collaborations Candy had with John Hughes it’s hard to find one that tops “Planes, Trains, and Automobiles”. In it Candy plays Del Griffith, a happy-go-lucky shower curtain ring salesman (of course). He repeatedly crosses paths with Steve Martin’s Neal who just wants to get home for Thanksgiving. Del is the talkative, ever-positive optimist and the perfect burr in Neal’s saddle. I think it’s Candy’s best character and his best performance.

So what are your thoughts on the late John Candy? Agree or disagree with my list? I would love to hear your picks in the comments section below.