It would be really hard for David Michôd’s “The King” to be misconstrued as a thorough treatment of William Shakespeare’s “Henriad”. Some of the earliest scenes tell us otherwise. Instead his new film is a much more concentrated adaptation that puts its focus primarily on young Henry V and his rise from dissolute prince to the reluctant King of England.

“The King” is more than a condensed version of the Bard’s renowned series of plays. It’s still a medieval yarn about early 15th century power and the men who wield it. But it’s a uniquely contemporary retelling that takes plenty of liberties while sporting a slyly modern philosophical edge. It marks the third feature film collaboration between Michôd (director and co-writer) and fellow Aussie Joel Edgerton (co-writer and supporting actor).

Whether it’s earned or not, Timothée Chalamet has been the hottest thing in Hollywood since, I don’t know, Jennifer Lawrence. And much like her, he is immensely talented and has been showered with an almost unfair level of adulation. Here he shines, first as young Prince Hal, the rebellious son of the ailing King Henry IV (the always good Ben Mendelsohn). Hal is content with swilling ale with his boozy friend and mentor Falstaff (Edgerton), once a proficient knight on the battlefield but now the Prince’s portly protector and confidante. 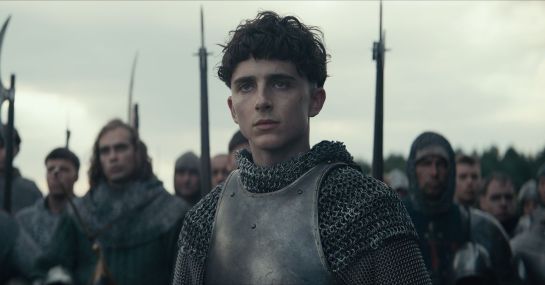 Hal’s defiance prompts his father to name his more devoted and by-the-royal-book son Thomas (Dean-Charles Chapman) as the heir to his throne. There’s an interesting family dynamic here, but one of the few weaknesses of Michôd and Edgerton’s script is in how little they explore it. Instead we breeze through the demise of the petulant and overly-ambitious Thomas, their father’s inevitable death, and Prince Hal’s coronation as King of England.

Hal, now King Henry V, is a pacifist at heart and determined not to follow in the footsteps of his warmongering father. But he quickly realizes the urgings towards war aren’t easy to quell especially when so many around him seem to want it. And finding a trustworthy voice among the politicians and clergy proves to be difficult. Re-enter Falstaff who is brought in out of the rabble and into the King’s court as a military adviser. Needless to say, his presence irks many of those already in the King’s ear.

It’s here that Chalamet’s performance really grabs your attention. With maturity and gravitas, he brings a deep, troubled solemnity to his character. At the same time his internalized portrayal shrewdly conveys the deep psychological conflict of a young king aspiring for peace while burdened under his father’s shadow. Chalamet’s chemistry with his co-stars is a real strength particularly Edgerton who gives us a much different take on Falstaff. 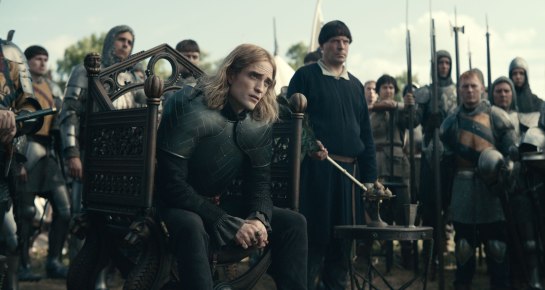 We also get a stellar supporting turn from Sean Harris who plays the hissing Chief Justice William Gascoigne. Lily-Rose Depp gets a small but meaty moment playing Catherine of Valois. Thomasin McKenzie briefly but effectively offers some gentle wisdom as Hal’s sister and the Queen and Denmark. But the real scene-stealer (and sure to be off-putting for some) could be Robert Pattinson as the Dauphin, the pompous heir to the French crown and perpetual thorn in Henry’s side. Pattinson swans around with a healthy dose of camp and enough absurdity to lighten up the otherwise dark and gloomy proceedings.

Michôd and cinematographer Adam Arkapaw bathe the first half of their film in the washed out blues and grays often seen with these types of period pieces. Yet despite its familiarity, the color palette fits and works well within the early setting. But the visuals truly pop once Hal and his army leave the dark castle for the shores of France. Specifically, it’s the fierce, mud-splattered Battle of Agincourt that stands out the most. It’s exquisitely shot from its tense buildup to the brutal, claustrophobic hand-to-hand combat.

“The King” does a good job reinventing Shakespeare’s characters and using them to offer up a meaningful critique of imperialism and the politics of war. It’s also a compelling character study of a son who wants no part of his father’s royal legacy but struggles to forge his own path as king. Shakespeare purists are sure to grit their teeth at Michôd’s dramatic license and willingness to take the popular story in new directions. But I loved the gritty fresh take and the strong, sturdy performances that drives the film from start to finish.