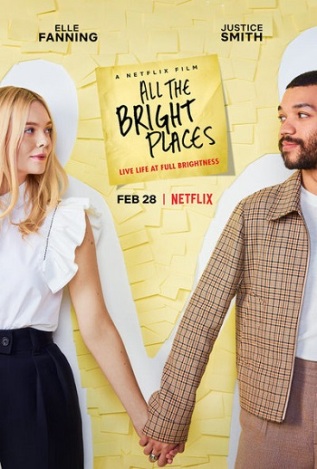 Teen dramas are a dime a dozen and finding a fresh one out of the enormous batch isn’t always an easy thing. Too often they mimic other movies or follow all-too-familiar formulas.    The new Netflix original “ All the Bright Places” does a little of both.  But at its heart lies a thoughtful story about the teen experience that deals with weighty issues and has the guts to stick with its convictions.

The movie is an adaptation of Jennifer Niven’s 2015 young adult novel. It’s directed by Brett Haley from a screenplay written by Niven and Liz Hannah. The story takes a delicate and earnest look at teen mental health, grief, and suicide through the unlikely friendship/romance of two young people in very difficult places. The movie is sympathetic and well-meaning but also honest. So anyone sensitive to these issues should be cautious.

Elle Fanning plays Violet, once a social butterfly but now withdrawn from her friends and family following the death of her older sister from a car accident. By sealing herself off Violet has no release for her grief which leads her to the ledge of a bridge where she  considers ending her life. But then she has a chance encounter with classmate Theodore who goes by Finch (Justice Smith). Out for an early morning jog, Finch sees the silhouette of Violet (Elle Fanning) standing high on the ledge. He talks her down setting their complex relationship in motion.

Finch works hard to get Violet to open up but in the process we see he has his own troubles. He’s an outsider at school and known as “the freak” due to his bursts of erratic, disruptive behavior. His “dark moods” leave him feeling isolated and out of control. During these times even the best efforts of his guidance counselor (Keegan-Michael Key) and sister (Alexandra Shipp) can’t seem to break through. And much like Violet, he keeps his feelings bottled up leading to him often being misunderstood by those around him.

Thankfully, the movie doesn’t get into diagnosing illnesses and disorders. It’s much more interested in the emotional toil and looking almost exclusively at the human side of the struggle. It’s can be ugly and messy. Often there is no quick fix. Thankfully the movie does have its moments of light. Violet and Finch partner up for a class project highlighting hidden landmarks across their home state of Indiana. As the two “wander” together it brings them closer and a romance sparks. Not the sappy sentimental kind. It’s more cathartic and entirely earned. At the same time a cloud of uncertainty hovers overhead.

Fanning and Smith are good-looking leads with a nice chemistry. They keep their characters grounded, navigating their complexities with empathy and intelligence. At times you can see Smith working a little too hard, but he’s charismatic enough to win us over. His cool, charming side shows a kid who listens to vinyl, quotes Virginia Woolf, and has a therapeutic  affection for Post-it notes (not the off brand mind you). But Smith really digs into Finch’s darker side showing the weight of the character’s emotional burdens.

Fanning has great instincts, showing off a dynamic range but with enough subtlety to keep Violet firmly planted in reality. It’s a role that could turn schmaltzy in a flash, but neither Fanning nor the material allows for that. Sure, there’s a little sap here and there, but not enough to gripe about. Depicting any type of mental illness is touchy territory, but the sincere and measured approach (starting with the young actors) leads to an authenticity that’s crucial to our investment.

While the story itself is a roller-coaster of feelings, Haley does a good job keeping things at the right temperature. Meanwhile composer Keegan DeWitt’s soothing mixture of gentle piano chords and elegant strings moves gracefully between enchanting and melancholy. And while the movie carries some of the lightweight genre appeal you would expect, “All the Bright Places” deserves credit for not just having serious intentions, but actually showing them on the screen.