Bridget Savage Cole and Danielle Krudy’s black comedy/thriller “Blow the Man Down” debuted a year ago at the Tribeca Film Festival. It took a while but this slyly biting and ever so slightly offbeat neo-noir has finally received its proper debut (thanks to Amazon Studios). It’s a movie full of surprises and made by a fresh filmmaking duo with a deft handling of both style and story.

In the seaside fishing village of East Cove, Maine sisters Priscilla (Sophie Lowe) and Mary Beth (Morgan Saylor) mourn the recent death of their mother. After the funeral Priscilla plans on running the family fish market and living in the house where they grew up. Mary Beth, bitter about having to leave college to help care for her mother, is already planning her way out of the town she despises.

The siblings learn their mother left them with a lot of debt meaning they could potentially lose the house. It leads to a heated argument that sends Mary Beth storming off to the local tavern. Once there she starts tossing back drinks with an unsavory type named Gorski (Ebon Moss-Bachrach). The two get drunk and she not-so-wisely agrees to drive him to his house just outside of town. An attempted assault, a harpoon to the neck, and a brick bash to the head leaves Gorski dead and Mary Beth in a panic.

You could say that what follows is a shining example of how not to cover up a crime. Mary Beth rushes home to Priscilla and tells her what happened. Uncertain whether she acted in haste or in self-defense, the sisters decide not to call the police and go back to Gorski’s place to clean up the mess. As for disposing of the body, let’s just say Cole and Krudy give us a grisly yet darkly funny sequence that had me thinking “Fargo” but with a stout feminine kick.

But there is another layer to the story altogether. Gorski’s disappearance cracks the door to East Cove’s deep dark past. It turns out Priscilla and Mary Beth’s mother was the linchpin holding the town’s matriarchal rule together. So with her gone, old wounds fester between a brothel owner named Enid (played with a devilish wit by Margo Martindale) and three busybody widows (June Squibb, Annette O’Toole, Marceline Hugot). All are connected by the sordid town secrets and each has their own self-interests and motivations.

Eventually the two story threads weave together to form a prickly, suspenseful mystery told through a myriad of fun and fleshed-out characters. The best may be Martindale’s Enid who operates like an organized crime boss, running her operation in plain sight but with enough clout to get away with it. Packing more snarl than smile, Enid defends her enterprise while at the same time showing the emotional toll it has taken on her. She’s a complex character and far more than some one-note villain. 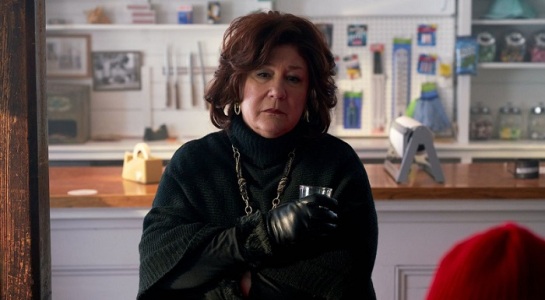 I can’t talk about this film without spending a few lines on its style and setting. Cole and Krudy had me onboard from the very start. The movie opens to the sound of a shanty being sung by a grizzled fisherman and his salty-dog chorus. It’s amusing, subtly haunting, and adds to the New England coastal flavor. They pop up a few more times in brief smile-inducing musical interludes. And then you have the atmosphere and vivid sense of place the directing duo and their DP Todd Banhazl are able to create. You can almost smell the scent of raw fish or feel the chill of the icy sea breeze.

Cole and Krudy don’t stop there. They add more to their mystery by throwing several other ingredients into the pot: a missing knife, a second body, a young by-the-book police officer (Will Brittain) and a disgruntled call girl (Gayle Rankin). It doesn’t all flesh out perfectly but the twists keep you guessing and the film really sticks its finish. Ultimately it feels heavily inspired by the Coen brothers especially in its melding of crime and humor. But its flipping of genre roles and the female-driven story gives it its own welcomed identity. It also introduces us to two exciting new filmmakers who already show a tremendous understanding of their craft. “Blow the Man Down” is now streaming on Amazon Prime.