Director Ross Clarke’s World War II era drama “The Birdcatcher” is built on a tough-to-sell premise that needs practically all of its creative parts to work perfectly. Unfortunately they don’t all quite gel leaving us with a movie full of good intentions but shaky execution and storytelling that’s never as convincing as it needs to be.

Set in 1942, the movie centers around a 20-ish young lady named Esther (Sarah-Sofie Boussnina), the daughter of a Jewish barber in Trondheim, Norway with aspirations of going to America and becoming a movie star. She’s a sweet, starry-eyed dreamer who like many has her innocence stripped away by the Nazi occupation. During a Jewish roundup Esther is separated from her parents but manages to escape into the snowy hills. 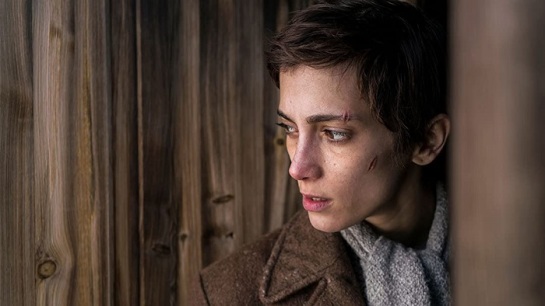 A lost, hungry, and freezing Esther runs into a sympathetic disabled teen named Aksel (Arthur Hakalahti). He’s the son of a brutish, Nazi-sympathizing farmer Johann (Jakob Cedergren) and obedient but secretive mother Anna (Laura Birn). Aksel hides Esther in the loft of their barn out of his parents’ sight, sneaking her food and taking a liking to her. Meanwhile his father frequently entertains and kisses up to a Nazi officer named Herman played by August Diehl (so good in last year’s “A Hidden Life”).

Knowing she’ll eventually be discovered, a resourceful Esther cuts off her hair and poses as a wandering lost boy named Ola. In a particularly ridiculous sequence Esther/Ola is caught by Herman who takes her to the family’s farm and encourages Johann to take her/him on as a farmhand. What could go wrong, right? Esther ends up tangled in a festering family drama that sends the story toward its inevitable climax.

Despite the sincere feeling behind it, “The Birdcatcher” is simply too hard to buy into. There’s no doubting that true stories similar to this actually exist and that realization give the film some weight. But it’s hampered by some needless clutter such as Aksel’s drunken abusive uncle (Johannes Kuhnke) and a poorly defined forbidden romance that may be a romance or may be something else (I still don’t know for certain).

Yet strangely despite its frustrations “The Birdcatcher” has an earnestness about it that makes it easy to digest. Much of it comes through Boussnina’s sensitive and committed lead performance. There’s also a touching epilogue that effectively knocks home the themes of empathy, compassion, and forgiveness. It doesn’t save the movie from it’s flaws, but it does stress the sincerity of its convictions. “The Birdcatcher” is now available on VOD.