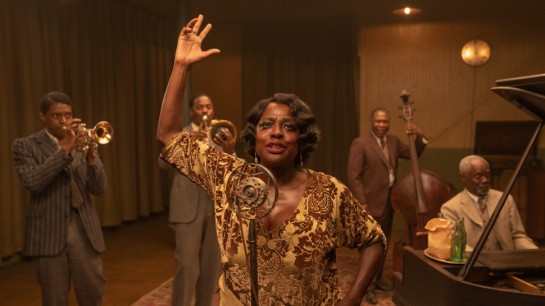 Streaming giant Netflix is hoping to add yet another Oscar contender from their 2020 movie Catalog with “Ma Rainey’s Black Bottom”. The attention-getting title comes from the August Wilson play of the same name about legendary Blues singer Ma Rainey. Touting Denzel Washington as a producer, Viola Davis as its star, and featuring the final film appearance by the late Chadwick Boseman, the film sports a lot of exciting big name recognition.

Director George C. Wolfe teams with screenwriter Ruben Santiago-Hudson to tell the story of a tense recording session in 1927 Chicago. At the center is Ma Rainey herself, the “Mother of Blues”, the “Songbird of the South”. She begins butting heads with her white manager and record executives. Meanwhile Chadwick’s Levee is a troubled yet ambitious trumpeter hungry to make his own mark in the bustling blues world. The movie looks full of period style, great music, and loads of charisma.

“Ma Rainey’s Black Bottom” premieres December 18th on Netflix. Check out the trailer below and let me know if you’ll be seeing it or taking a pass.