It goes without saying that 2020 has been a rollercoaster year for the movie industry. But hats off to distributors like IFC Films who throughout the year has steadily released an incredibly diverse selection of high quality movies across streaming platforms. Family dramas, psychological thrillers, war–time period films, unconventional biopics, a hysterical road trip comedy, and that just scratches the surface. IFC has made a tough year a little bit better for movie fans.

Their latest film is yet another solidly entertaining entry into their catalog. “Kindred” is a mature, slow-boiling drama with a baked-in tinge of psychological thriller. It comes from first-time feature film director Joe Marcantonio who uses a very unobtrusive touch to tell a story rich with meaty subtext. The script (co-written by Marcantonio and Jason McColgan) takes its time unfolding, putting the bulk of its focus on the characters and their tense relationships. It’s sure to play too slow for some, but I found myself caught in the film’s devilish web. 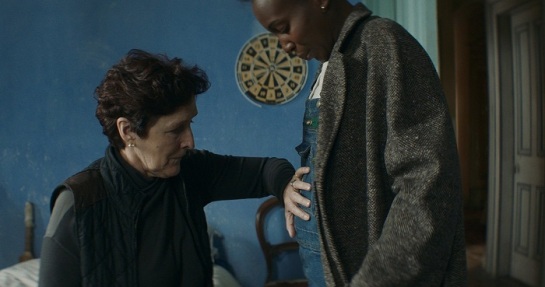 Charlotte (Tamara Lawrance) and her boyfriend Ben (Edward Holcroft) have made the decision to finally move from the UK to Australia. What should be an exciting time is dampened when the couple go to inform Ben’s mother Margaret (Fiona Shaw). The bitter matriarch  lives in a deteriorating family estate which Ben, the lone blood heir, is in line to inherit. The problem is he doesn’t want it which is something his mother can’t accept. “Nine generations!” she screams as temperatures reach their boiling point.

Then things are complicated even more when Charlotte finds out she’s pregnant. With a baby due Margaret expects them to stay, but after hearing they still plan on moving she loses it. “You’re not stealing my own flesh and blood to the other side of the planet.” Meanwhile Ben’s measly and frustratingly cordial stepbrother Thomas (Jack Lowden) slickly tries to play peacemaker. But when Ben is killed in a tragic stable accident the film takes a sneakily sinister turn.

After an altercation with Margaret at the hospital, Charlotte blacks out and later wakes up at the family estate. Margaret and Thomas pledge to take care of her until she’s well, but it doesn’t take long for Charlotte to start questioning their motives. As Charlotte pushes back, Margaret tightens her grip because in her words it’s “what’s best for the baby“. This ends up being the film’s central conflict. The gaslighting story angle is certainly nothing new, but Marcantonio infuses a familiar idea with grounded character-centric twists. And the performances from Lawrance and Shaw create and develop a palpable tension between their characters.

There are plenty of other ingredients that help enrich the movie. There are the brief appearances of crows scattered throughout the film hinting at something psychological or possibly supernatural. There’s the crumbling manor itself, a fitting metaphor for what’s left of the family who lives there. There’s Carlos Catalán’s evocative cinematography and one of the best mood-setting scores of the year from Jack Halama and Natalie Holt. It all culminates in a chilling final act that is remarkably restrained (like the bulk of the film) and perfectly fitting.