Even if you question Dylan Farrow’s accusations, you have to admit Woody Allen’s personal life has been suspect and that’s putting it nicely (many would say repugnant is more accurate). In the wake of #MeToo few have seen their careers take a hit quite like his. Despite his fervent denials, Allen has been shunned by many in the film community. As a result he was released from his contract with Amazon Studios and his latest film pulled from their release schedule.

Allen has since acquired the film rights from Amazon and has slowly been releasing “A Rainy Day in New York” across the globe. It’s now out in the States and within minutes of watching I had spotted practically all of Allen’s most recognizable signatures: the neurotic and insecure narration, a strong sense of location, classic piano chords dancing in the background, the cloud of melancholy hanging over numerous characters. And while several of Allen’s later efforts feel like exercises in rinse-and-repeat, I still find his movies effortlessly watchable, this one included.

“A Rainy Day in New York” certainly won’t fall among Allen’s very best works. It’s a movie that gets off on the right foot and for the first 45 minutes or so I was enamored with it despite some noticeable flaws. But then the few threads of plot begin to unravel leading to a messy final act full of thinly sketched characters   and underdeveloped ideas.  It doesn’t completely undo the film, but it highlights an unfortunate lack of depth and focus.

This time around Allen’s avatar is Timothée Chalamet. He plays Gatsby Welles, the eccentric son of stuffy upper-crusters and boyfriend to Ashleigh (Elle Fanning), a sweet and flighty girl from Tucson. The two attend Yardley University, a small liberal arts college in upstate New York. Ashleigh enjoys school and is a reporter for the university’s newspaper. Gatsby doesn’t have much interest in grades, class or anything else school related.   Instead he’d rather be lounging at a Manhattan piano bar or buying into a high-stakes poker game. When asked about his plans for the future he quickly replies “floundering“.

Ashleigh lands a big interview with tortured indie director Roland Pollard (Liev Shreiber) in (where else?) New York City. Gatsby jumps at the chance to return to the Big Apple and immediately starts planning their time together. But his plans get shot down when Ashleigh’s one-on-one interview turns into a madcap caper of sorts as three highfalutin movie men  strangely vie for her affections.

The men – the brooding Pollard, his nervy screenwriter Ted Davidoff (Jude Law) who suspects his wife Connie (Rebecca Hall in little more than a cameo) is having an affair, and a heartthrob actor (and easily the most shallow of the three) Francisco Vega played by Diego Luna – shuttle Ashleigh from one scenario to the next eventually stranding her character at a frustrating narrative dead-end. Fanning deserves credit for charming her way through scene after scene, but ultimately she’s let down by a storyline that gives her no meaningful place to go.

That leaves Gatsby to mope around the rainy city in his tweed jacket and unruly mop, waiting for Ashleigh to call and offering up sardonic musings whenever the script calls for it. While strolling he bumps into Chan (Selena Gomez), the snarky younger sister of an old girlfriend and they decide to kill some time together. It’s clear the two are supposed to have some kind of spark, but the chemistry between Chalamet and Gomez is inconsistent at best. Still, there is some fun and witty chatter between them that may not sound like anything real college kids would actually say yet it feels right at home in a Woody Allen movie. 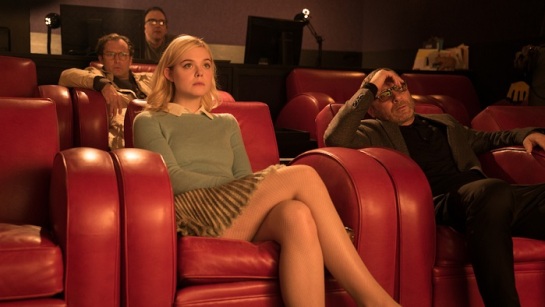 As an out-of-her-element Ashleigh rubs noses with the entertainment elite, Gatsby goes to the Metropolitan with Chan, visits his buffoonish brother who wants out of his upcoming wedding due to his fiance’s “fatal laugh“, sits in on a big-money poker game, and meets a call girl named Terry (Kelly Rohrbach) in a dive bar. All of this while trying to avoid his aristocratic parents who are throwing a lavish party for their friends in the 1%. Both of the dual storylines are a bit scattered but have their own quirky Allen-esque allure.  That is until the aforementioned final half-hour when Allen throws all of the characters at the screen before limping to the finish line.

And that leads to my other issue, one that I just couldn’t shake – Chalamet. For starters he seems way too young for the role Allen has penned. That’s not so much his fault as it is the writing and/or casting. There’s also an inconsistency with his delivery. There are plenty of times where Chalamet could pass for an authentic person. But there are far too many instances where it looks as if he’s doing an impression of a traditional Woody Allen character.  It’s difficult to put into words, but in these scenes you can see Chalamet straining to fit in a mold. 

It’s hard to watch “A Rainy Day in New York” and not feel like it’s something you’ve seen before. Simply put, Allen doesn’t have much new to say in this, his 48th movie. Yet there are times when the film pulsates with the same satisfying energy of Allen’s past work. Its soaked with familiar feelings of nostalgia, from its anachronistic lead character unwittingly channeling a bygone era to more personal Allen obsessions that spring up throughout. It may not paint the most modern portrait, but in many ways I think that’s the point. Allen has often dabbled in real-world fantasy as a way of wrestling with ideas and longing for the past. It’s no different here, just a bit messier.