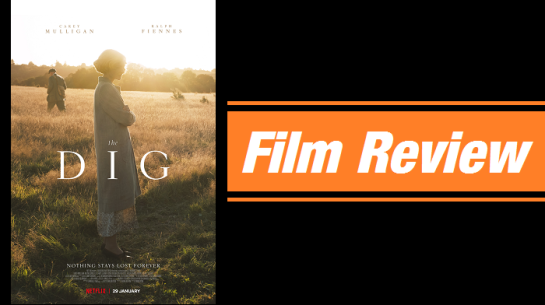 English journalist, television critic, and author John Preston’s 2007 historical novel “The Dig” was a reimagining of the 1939 excavation at Sutton Hoo in Suffolk, England. It’s the site of two early medieval burial grounds, one of which contained a mostly undisturbed Anglo-Saxon ship along with numerous artifacts and treasures fit for a king’s burial. Preston built his own drama around the discovery but for the most part kept his focus on the amazing find.

Netflix’s upcoming film adaptation of Preston’s book comes from Australian director Simon Stone, written by screenwriter and playwright Moira Buffini. The movie adds even more dramatic layers (some more effective than others) while still trying to do justice to the Sutton Hoo excavation. It also brings together an intriguing cast of stellar English talent including Carrie Mulligan, Ralph Fiennes, and Lily James. I was instantly onboard. 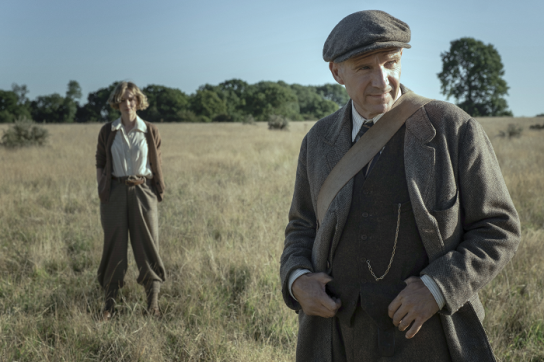 The film’s first half is magical, both narratively and cinematically with Stone capturing the awe, wonder, and mystery of such a magnificent discovery. Through his story and his camera, Stone introduces us to his characters and builds our anticipation for what waits to be unearthed. There’s an almost Malickian beauty to how cinematographer Mike Eley shoots these early scenes. The fluidity of his camera movements, the striking angles, the way nature is admired through his lens – its absolutely gorgeous filmmaking.

The story gets off on a similarly impressive foot. Mulligan plays Edith Pretty, a widow who owns the estate where the burial grounds lay. Mulligan breathes elegance into her character, but there is also an unmistakable sadness that Edith works to hide from her precocious young son Robert (Archie Barnes). It’s this sadness and grief that drives her interest in what lies underneath the ancient mounds on her property. So she hires a local excavator Basil Brown (Fiennes) to handle the dig. He’s an odd but capable sort – a kind man who has buried sorrows of his own.

Unfortunately the story loses some of its zest in the second half when the head of the British Museum (Ken Stott) arrives with his entourage. This leads to wrangling between museums, each trying to convince Edith that they are better suited to house something of such cultural and historical value. This also introduces Peggy (Lily James), a young archaeologist whose cold and indifferent husband clearly has eyes for another. It’s yet another good performance from James who sadly ends up with a character trapped in the more unimaginative machinations of the plot. This ultimately leads to an undercooked and completely telegraphed romance that feels more convenient than natural. 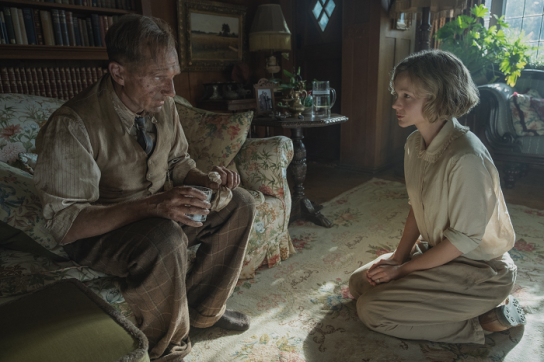 Strangely even the camerawork is more subdued in the second half, losing much of its artful style and creativity. It still looks good but hardly as eye-popping as in the earlier scenes. While the shift in focus isn’t nearly as absorbing, Stone keeps his audience attached through the performances and with some thoughtful subtext about the coming war. Airplanes overhead, a passing truck full of soldiers, brief audio from a radio broadcast – it all points to what’s boiling on the world stage. And those subtle (and sometimes not-so-subtle) reminders bring an alluring stillness to the film as the characters (and the audience) grasp the significance of their archeological discovery while slowly facing the reality that their nation is about to be thrust into war.

It’s hard to put into words both the love and frustration I have for “The Dig”. I was enraptured by the first 45 minutes or so – caught up in it’s mystery, its beauty, the period detail, and sweeping visuals. I loved Stefan Gregory’s graceful score which oscillates between vibrant piano chords and more soulful aching strings. And I loved Mulligan and Fiennes, both their characters and their performances. But the movie loses its footing once the fiction begins overshadowing the facts and it dives into a much less interesting and lesser developed side-story. As it is, I quite like “The Dig” even as I find myself longing for what it could have been. “The Dig” premieres January 29th on Netflix.