Shaka King’s upcoming biographical drama “Judas and the Black Messiah” sets out to tell the story of Black Panther Party leader Fred Hampton. In the late 1960’s Hampton rose to prominence as the chairman of Chicago’s branch of the Black Panthers. Known for his fiery and persuasive speeches, Hampton helped grow the leftist group’s influence and numbers. All of this was being watched and documented by J. Edgar Hoover’s FBI along with local officials who deemed Hampton a radical threat to their morally corrupt ideals.

On the night of December 4, 1969 Fred Hampton was murdered in his Chicago apartment by members of a Cook County tactical unit during a pre-dawn raid. He was only 21-years-old. Other Black Panther Party members were killed or wounded in what was a coordinated effort between city, state, and federal organizations. FBI informant William “Bill” O’Neal provided detailed layouts of the apartment including where Hampton slept. By the end of the raid law enforcement had fired a total of ninety-nine shots. The lone gunshot from the Panthers was into the ceiling. Hampton was still in his bed, executed at point-blank range.

As the film’s title implies, “Judas and the Black Messiah” focuses on the relationship between Fred Hampton and Bill O’Neal and the betrayal that led to the bloody raid. The film is directed by Shaka King who produces and co-writes the screenplay with Will Berson. Ryan Coogler also gets a producing credit. The film made its world premiere at this year’s Sundance Film Festival and brings with it quite a bit of awards season buzz. 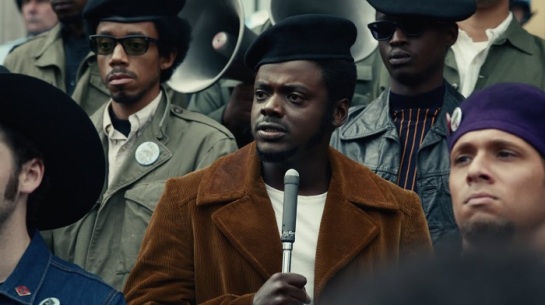 The film stars Daniel Kaluuya who plays Hampton in a way that highlights his strengths as an actor while still showing his limitations. The hushed stoicism Kaluuya brings to his characters has almost become a staple. But it often comes at the cost of emotional warmth and complexity. As Hampton, Kaluuya’s quiet intensity comes in handy. He’s really good in the attention-getting scenes where he gives spirited speeches to hungry and frustrated audiences. But Kaluuya really shines when the movie stills and he speaks as much through his eyes as he does with his voice. That’s when we get the greatest sense of who Fred Hampton was.

Unfortunately there is still a coldness to Kaluuya’s performance that undercuts certain elements of the story, particularly his romantic relationship with a young disciple named Deborah (a sweet, delightful, and moving Dominique Fishback). The two meet after a Chicago rally and her admiration for Fred’s activism blossoms into something more intimate. But so much of their relationship is left on the sidelines, and what we do get is emotionally energized by Fishback far more than Kaluuya.

In fairness, Hampton’s romance with Deborah isn’t the film’s main interest. It adds some extra weight to the story but the movie is mostly focused on Hampton and William O’Neal. ‘Wild Bill‘ as he’s occasionally called is played by Lakeith Stanfield, an actor who may not have the steely super-seriousness of Kaluuya, but who brings a wider emotional range. When we first meet Bill he’s attempting to hustle some gang members by brandishing a fake badge and posing as a federal agent. They get wise pretty quick forcing him to escape in a stolen car. But he’s picked up by police and booked for impersonating an officer and grand theft auto.

Enter Jessie Plemons playing FBI Special Agent Mitchell. With consent from a laughably creepy looking Martin Sheen playing J. Edgar Hoover, Agent Mitchell pressures Bill into becoming an informant in exchange for no jail time. Over the course of the film Bill O’Neal joins the Black Panthers, rises through their ranks, and eventually becomes head of security and Hampton’s personal bodyguard. All while reporting back to Mitchell and getting paid by the government. It all inches towards the combustible finale full of heartbreak and anger. 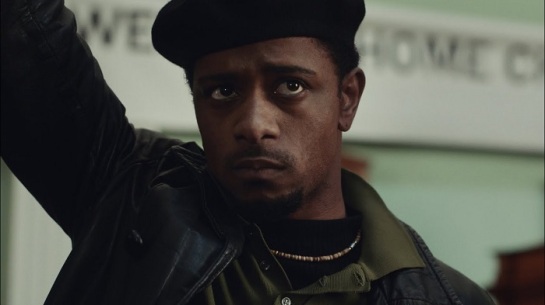 It goes without saying King and company have some meaty material to work with. That’s why it’s frustrating to see so much of it slip through the cracks. In the film’s defense there is a lot of ground to cover in a little over two hours, especially when you’re splitting your story and screen time between two main characters. But a few resonating moments aside, we mostly get a surface-level summation of Fred Hampton’s relationship with Bill O’Neal and neither character ends up getting the attention they deserve.

And despite their clear relevance to the story and heavy presence throughout the film, the feds and the police are mostly blank faces – more plot pieces than anything else. Only a dry and predictable Plemons and a wacky Martin Sheen (who mercifully only gets two scenes) give any voice to the animosity and rancor driving their disdain for Hampton and the Black Panthers. And barely a word about how the FBI and Chicago authorities secretly undermined Hampton’s social work and stoked violence between black street gangs. Again, not necessary to the story, but it’s yet another thing that would bring weight and insight.

Though partly true, it would be reductive and overall inaccurate to lump “Judas and the Black Messiah” in with other by-the-books biopics. Shaka King has good intentions and is trying to open eyes not just to history but also to the present day. The performances are generally good and both the cinematography (Sean Bobbitt) and the score (Mark Islam, Craig Harris) capture the right mood and the setting. But sadly the film skirts character depth in order to hit key moments on Hampton’s timeline while at the same time leaving too much out from the textbook version. It leaves the film in a weird place – bold and unflinching yet too broad and missing depth where it needs it most. “Judas and the Black Messiah” opens February 12th in theaters and streaming on HBO Max.