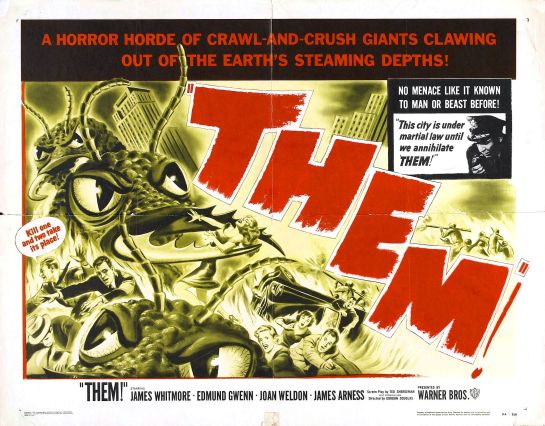 I’ve recently started revisiting some of the 1950’s sci-fi classics. I remember growing up and watching many of these films whenever I had the chance (which wasn’t often in the days of no cable TV and only three watchable local channels). The 50’s and early 60’s sci-fi genre saw mankind up against everything from huge tarantulas, sea monsters, giants, and a large assortment of alien threats, and as a young boy I loved them all. Of all of the 1950’s sci-fi creature features, “THEM!” most certainly ranks among the best of the bunch. “THEM!” was first conceived as a 3-D project from Warner Brothers, at least until a series of on-set technical issues arose. So the production team created the film in glorious black and white and I can’t imagine it any other way.

The movie’s main threats are giant ants which mutated as a result of radiation from a nuclear test detonation over the New Mexico desert in 1945. These massive insects are well over 9 feet long with bone-crushing mandibles and are byproducts of the new atomic age (at least new in 1954 – when the film was made). In fact, it’s Edmund Gwenn’s Dr. Medford character who paints the new nuclear world as a terrifying, unknown, and unpredictable place. That theme plays in the background of the entire movie and while maybe not as effective today, it’s still easy to see how it could create a fear and tension on its own.

The ants are first discovered when New Mexico state trooper Sgt. Peterson (James Whitmore) and his partner come across a little girl wandering aimlessly through the desert. She’s in shock and unable to tell them who she is or what she’s doing. They end up connecting her to a demolished camper of a now missing vacationing family. A string of other mysterious deaths, including Peterson’s partner, leads to F.B.I. Agent Graham (James Arness) being called in to help with the investigation. Dr. Medford (Gween), a leading myrmecologist from the Department of Agriculture also joins the investigation along with his “expert” daughter Pat (Joan Wheldon). They discover the reasons behind the deaths and their main goal becomes killing the bugs while containing them within the desert. But that doesn’t work out so well and before long they have a potential global crisis on their hands.

The story is attributed to a collaborative effort, but combined with Gordon Douglas’ marvelous direction, it is extremely clever and well constructed. The story starts off with a murder mystery feel as the officers, agents, and scientists piece together clues to uncover the mystery behind the deaths. What’s impressive is that it doesn’t feel manufactured or underplayed. The early investigation scenes are very well conceived and helped even more by Douglas’s slick use of his cameras. Smartly, the movie doesn’t reveal the ants right away which builds the suspense and anticipation so that when we finally see them, they have been established as a serious threat. Of course by today’s standards there’s nothing particularly scary of unnerving about them. But I still have no trouble going back to when people first saw the film and I still get a little giddy when I hear the ant’s menacing screeches.

I also love the way that everything in the story is taken seriously. Sure, there are some moments of good humor, but as a whole, the story is told in a very factual, pokerfaced way. One reason this is so good is because it leaves the audience toying with the possibilities that these bizarre and outlandish things could happen. While the writing is essential to this, the performances are equally important. Whitmore, Gwenn, and Arness are perfect fits for their roles. Wheldon is good as well although she isn’t all that convincing as an esteemed entomologist. But there are other small but fun roles to be found. A young Leonard Nimoy has a brief scene as an Air Force communications officer. Fess Parker also has a brief but entertaining part as a boozer stuck in a mental hospital.

“THEM!” has been recognized as an influential movie within the science fiction genre. Many great films that followed featured elements that could be traced back to this movie. For example, I couldn’t help but connect the idea of a queen laying eggs deep underground only to have them destroyed by flamethrowers to one of my favorite sci-fi treats of all time – James Cameron’s 1986 classic “Aliens”. It’s also a movie that helped usher in the new era of horror/sci-fi cinema. From the classic Universal monsters to the age of big bugs and spacemen, “THEM!” was at the forefront of the transition. I don’t doubt that many modern moviegoers will have a hard time digesting not only this movie but the entire genre. But the genre holds a special place in my heart and “THEM!” was the quintessential big bug movie.