Akira Kurosawa’s 1961 classic Yojimbo is a Japanese samurai film that’s not only beautifully hypnotic entertainment but is a master’s class on camera work and film making. Kurosawa creates a gritty and audacious period picture that manages to mix action with small bits of dark comedy while constantly showing off his technical savvy.

Yojimbo was heavily influenced by American westerns from the Japanese village’s dusty, deserted main street to the face-offs reminiscent of classic western one-on-one gun duels. Even more interesting is that it went on to be the inspiration for other westerns including Sergio Leone’s A Fistful of Dollars, which is almost a scene by scene replication instead of a remake. Both films tell the story of a mysterious stranger who enters a small town ran by two brutal, warring gangs. Instead of heeding the advice of a local resident, the stranger sees there’s money to be made in the village by playing both sides. Even Clint Eastwood’s Fistful character seems specifically patterned after Yojimbo’s samurai all the way down to his constant beard scratching.

Toshiro Mifune gives an impeccable performance as the solemn wandering samurai. He and Kurosawa collaborated for 16 films with Kurosawa once saying of Mifune  ”I am proud of nothing I have done other than with him”. Their creative chemistry is evident in Yojimbo with Kurosawa really focusing on Mifune’s strength of communication through expressions and mannerisms. This is a strong performance. 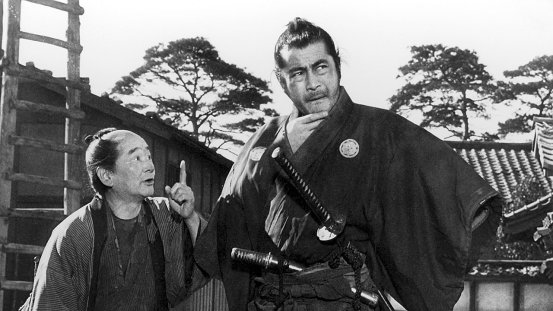 Yojimbo looks and sounds amazing. Masaru Sato’s magnetic score starts with the opening credits and resonates throughout the picture. The cinematography is fascinating with some cleverly staged camera angles, near perfect camera movement, and beautiful wide-framed shots. The story is pretty basic but very efficient with the exception of a few too many conversations over sake at the restaurant. Yet it’s never boring and more often times mesmerizing.

Yojimbo earns it’s recognition as a classic. With each viewing I gain a better appreciation for the movie and for Kurosawa’s brilliant vision. It’s easy to see why another great director like Sergio Leone would be inspired by Yojimbo. It’s a true motion picture  accomplishment and you don’t have to be a cinephile to appreciate it. If you haven’t seen it, make time to. Then follow it up by watching A Fistful of Dollars. You’ll not only see a great film but also appreciate it’s influence.