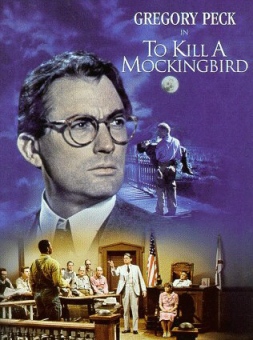 Considered an American movie classic, “To Kill a Mockingbird” is one of the best films to come out of the 1960’s and features what many consider to be Gregory Peck’s finest performance. It was nominated for eight Oscars, a winner of three, and was listed in The National Film Registry in 1995. In many ways “To Kill a Mockingbird” is a time capsule. Each time I watch it I’m transported back to a time that in many ways was kinder and gentler but not without its own open wounds. What’s most impressive is that it manages to do this without ever feeling unimportant or dated. It feels just as powerful and relevent now as it did when I first saw it.

The movie is based on the Pulitzer Prize winning novel by Harper Lee about the small town of Maycomb, Alabama during the 1930’s. Gregory Peck plays Atticus Finch, a town lawyer and a single father of two young children. Atticus is asked to represent Tom Robinson (Brock Peters), a black man who is accused of beating and raping a white woman. Atticus believes in the judicial process and believes Tom to be innocent. But even before the trial, many in the town have already judged Tom to be guilty and tensions soon reach the boiling point.

Peck won the Best Actor Oscar for his performance and many have said it was because of the striking similarity between him and his Atticus character. Atticus is a true man of character and integrity. He stands up for what’s right and tries to instill that same principle in his children. But while the trial and the fallout is a key part of the story, it’s not the main part. The movie’s bigger focus is on Atticus’ children, his son Jem (Phillip Alford) and his daughter Scout (Mary Badham). We first see them in all their innocence, from their imaginative playtime to their light-hearted mischief. Jem and Scout just live their life with a care-free child-like approach that I was really, really drawn into. Perhaps the wonderful portrayal of their innocence helps make what comes later so much more powerful.

At its core, “To Kill a Mockingbird” is about the loss of innocence. Eventually things unfold through the eyes of the children that reveals to them the darker and more troubling aspects to the world they live in. As the town begins to react to the alleged rape and the tensions leading up to the trial date rise, the kids see things that leave them confused and often times scared. The way director Robert Mulligan switches his camera to the children as they’re watching these harsh and disturbing things unfold is beautifully executed yet so heart-breaking. But yet it’s true and authentic. Unfortunately, as kids we’ve all had those moments. Moments when we realized that the world wasn’t just about tire swings and ice cream. Moments that we see the dark side of society and the people around us. But that’s also when the light shines the brightest and for these kids, their father Atticus was certainly a shining light.

There are several other smaller but equally enthralling side stories and side characters in the movie. Jem and Scout make friends with a young boy named Dill (John Megna) who comes to visit his Aunt Rachel each summer. I loved Dill and the three have some great scenes together including their investigations into Boo Radley, a mysterious crazy man who is believed to only come out of his creepy broken-down house after dark. Robert Duvall plays Boo in what was his big screen debut. I also loved Jack K. Anderson’s performance as Bob Ewell, the slimy and disgraceful father of the rape victim. He’s a despicable man and his vitriol hatred makes him an easy character to dislike. Everyone is well cast and the performances are spot-on.

I also loved the way the film visually captured the 1930’s Depression-era South. By the end of the film you really feel as though you know Jem and Scout’s neighborhood as if it were your own. The subtle things such as porch swings, school attire, and southern accents all give the movie such a homey and believable feel. But the movie doesn’t shy away from the deep racial divide and clear bigotry that was a problem at that time. It shows a warped and broken social structure that put personal hatred above justice and makes no apologies. We see this in not only the story itself but also in the striking visual details as well. 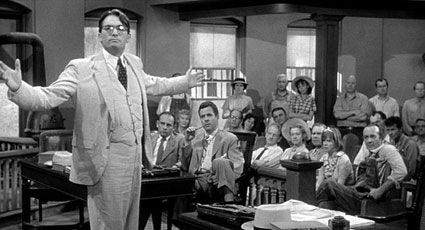 I think my only real issue with “To Kill a Mockingbird” was with the courtroom scene. Now don’t misunderstand me, it was a great extended scene. But it felt to me like something was missing. With a couple of exceptions, there wasn’t a lot of emotion or intensity. It also seemed as though everything moved and flowed perfectly with nothing to buck the plans of the defense or the prosecution. Now I understand that the courtroom scene itself wasn’t intended to be the centerpiece of the picture. But I really felt it could have had a little more “pop”. That said, Peck was fantastic in the scene and his questioning of Bob Ewell and Tom Robinson were fantastic moments in the film.

“To Kill a Mockingbird” does so many things right that it’s easy to overlook the small faults. Peck certainly deserved his Oscar as he is brilliant playing, as many believe, himself. Atticus Finch really touched me especially as a father trying but failing to shield his kids from the sick side of the world they live in. That father/children relationship really, really worked for me. But the movie also had so many other components that resonated with me and that’s another reason it’s so good. It’s a multifaceted story that’s told with a great visual and technical style and that isn’t ashamed to address the deep-rooted problems of that day. It’s been called “timeless” and I have to agree. It never gets old and it still has the same effect on me today as it always has.

12 thoughts on “REVIEW: “To Kill A Mockingbird””