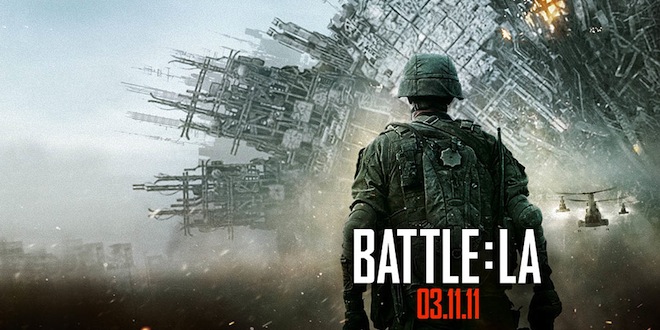 When reviewing a film I always try to consider what kind of movie the filmmakers intend to make. It’s especially important to employ this philosophy when reviewing a movie like “Battle: Los Angeles”. I enjoy all kinds of movies including those that are intellectually challenging, emotionally stimulating, or even the proverbial mindless popcorn picture. “Battle: Los Angeles” is very honest about it’s intent and never pretends to be something it isn’t. It could best be described as “Black Hawk Down” meets “Independence Day”. It takes realistic, gritty military combat and mixes it with the alien invasion angle. It’s a loud, simple, explosion filled action film that does succeed to a degree.

In some ways it resembles a video game, not only by it’s title but also by it’s look and feel. What’s funny is that many modern video games have more plot than “Battle: LA”. It’s a very basic story. A staff sergeant (Aaron Eckhart) and his new platoon are sent into the alien infested Los Angeles battle zone to help escort out a small group of stranded civilians. That’s really it. It starts with a very brief introduction to the platoon but almost immediately the first attack occurs and the action takes off, only occasionally slowing down for small doses of character developing dialogue. While they try to add some degree of depth to the characters, other than Eckhart’s, none are all that interesting. 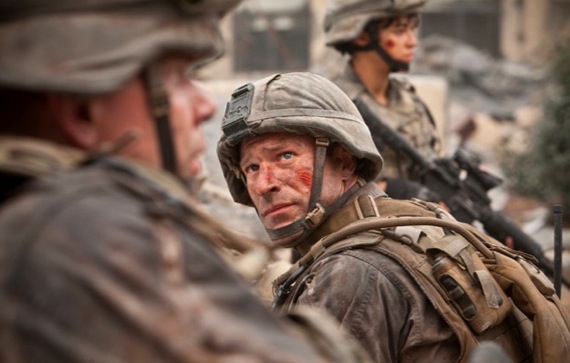 The movie also uses every military cliché you can think of. Whether it’s the personalities in the platoon or the contrived dialogue, you name the cliché, it’s used here. We’re also offered very little in regards to explanation. We hardly know anything about the alien invasion even though we do gather tidbits of information through brief glimpses of CNN newscasts (which I actually liked). The movie vaguely informs us that the alien’s objective is to steal our water and we get a little information about how they function. But to be honest, in this type of film is it really that important? Obviously the filmmakers think not.

“Battle: LA’s” action is it’s bread and butter and it’s largely impressive. Director Jonathan Liebesman used handheld cameras to give his film the familiar documentary feel while recreating the chaos and intensity of war. It’s nothing we haven’t seen before but it works more often than not. While a few scenes are a little disorienting it’s very effective most of the time. The CGI is generally good and especially shines in the large-scaled shots of the city and in images showing the massive destruction from the battles. The look of the aliens is serviceable but I was never blown away by them or their technology. There are some fierce action sequences particularly a frantic battle on a freeway and the final battle which I won’t give away. For my money, these scenes worked pretty well. 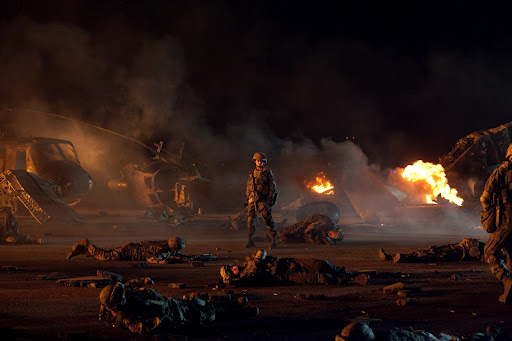 Aaron Eckhart is well cast as the combat-seasoned staff sergeant and the only remotely interesting character. Michelle Rodriguez plays the exact same type of role she always plays. The other performances range from fairly good to pretty bad. But then again this isn’t a performance driven picture, right? The bigger problem is the actors aren’t given much to work with. They also aren’t asked to do much more than shout and shoot so judging acting performances in this type of picture is pretty pointless.

“Battle: Los Angeles” isn’t a perfect film but it’s an honest one. It’s aim was to be a pre-summer popcorn action movie and it hits it’s mark. The trouble is the plot is paper-thin, the aliens aren’t that menacing, and it’s loaded with pointless, forced, and clichéd dialogue.. But the action is intense and it’s shot and edited in a way that pulls you into the combat. Even with it’s shortcomings, it manages to be a fairly entertaining getaway, but it’s not one that will stay with you very long.