Ok, let’s get one thing out of the way first. Anyone who is going into “The Expendables 2” expecting a deep, penetrating narrative and Oscar caliber performances are clearly going for all the wrong reasons. This sequel to Sylvester Stallone’s 2010 film is bigger, louder, and for my money better than the first picture and it’s an unashamed 80’s action movie homage that had me hooked from the first moment. Is this an exercise in challenging and complex filmmaking? Far from it. But it is an honest and unapologetic movie that knows exactly what target it’s aiming for and hits it dead center. Does that mean it’s a perfect movie? Most certainly not. But it’s a ton of fun for those knowing what to expect and I defy fans of these “Who’s Who” of action movie heroes to walk out without a smile on your face.

Sly Stallone co-wrote and stars in “The Expendables 2” but this time he passes the directing duties to Simon West. This contributes to what I think is one of the biggest differences between this and the first film. The first movie had its share of salutes to the classic action pictures but overall its tone was much more serious. The sequel is much lighter with lots of playful camaraderie, intentional cheesy one-liners, and a self-deprecating humor that’s woven from start to finish. What’s really great is that all of this works so well. The movie and it’s actors constantly poke fun at themselves and at many of the things that were commonplace during the 80’s action craze. The old guys constantly makes fun of their age. They spoof each other’s famous one-liners. Even Chuck Norris tells a Chuck Norris joke. And their names are a hoot. Aside from Stallone’s rather tame Barney Ross, you have Lee Christmas (Jason Statham), Booker (Norris), Trench (Arnold Schwarzenegger), Mr. Church (Bruce Willis), Gunner Jensen (Dolph Lundgren), Hale Caesar (Terry Crews), Toll Road (Randy Couture), and Yin Yang (Jet Li). While it sounds like a G.I. Joe roster, it classic 80’s cheese. But could any of the names be better than that of the movie’s antagonist, Jean Vilain (Jean-Claude Van Damme)?

But while there is a lot of humor throughout the film, this is a straight-forward, in your face, action movie filled with bullets, blades, and blood. The movie starts out with a bang – a really, really loud bang. Director Simon West lets the audience know right away what they’re in store for. The team is reintroduced via a thundering rescue mission soaked with gunfire, huge explosions, and machismo. Afterwards, Barney is approached by the shady Mr. Church to carry out a simple retrieval mission. But things go terribly wrong when Barney and company cross paths with Jean Vilain. After Vilain gets away, the team sets out on a revenge-fueled, save the world mission that doesn’t pull a single punch. They shoot, punch, and knife their way through hordes of baddies on their way to the big final showdown that we know from the start is coming.

The movie takes you on a ride from one extravagant action set piece to another so there’s plenty of opportunities for the huge cast to get their moment in the sun. They all kick a lot of butt each with their own unique style of buttkicking. And while the body count is huge and there is plenty of blood, West keeps the extremely graphic violence seen in the first film mostly in check. But action movie junkies get more than their money’s worth. The action sequences are furious and intense and while they do dabble in the absurd, it never goes off the rails enough to lose the audience. In fact, it’s those few moments of absurdity that were for me the most nostalgic. The action scenes are cleverly constructed and edited and they’re clearly the film’s bread and butter. 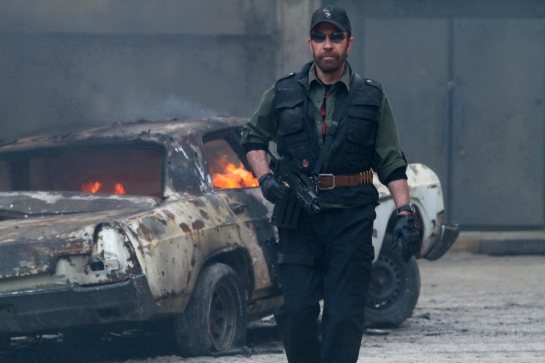 I’ve mentioned a couple of times already that the cast is having a lot of fun. Everyone fits in nicely and the back and forth banter and old school “I got your back” virility never grows old. The characters each have their own personalities that we get to enjoy despite the almost nonexistent character development. Stallone and Statham are best buddies. Lundgren straddles the line between heroic and insane. Crews and Couture are the muscles of the bunch. Then you have Schwarzenegger, Willis, and Norris who are basically…well…Schwarzenegger, Willis, and Norris. But I don’t think I enjoyed anyone more than Van Damme as the cold-blooded villain. He’s clearly having a blast and he nails his character. I loved every scene he had and yes, he can still do the flying spin kick.

It’s been a lot of fun reading critics guiltily try to explain why they enjoyed “The Expendables 2”. Me, on the other hand, I’m not ashamed to give a movie praise that entertained and excited me. And look, I could easily spend time harping on the plot points that didn’t work, it’s extreme predictability, and some of the sub par performances. But instead, I recognize exactly what “The Expendables 2” intends to be. It clearly won’t be a movie for everyone. Those with no connection to or interest in the 80’s action genre or the actors probably won’t connect or be interested in this picture. But I get back to one key thing – I had a lot of FUN. I grew up on these guys and this movie took me back. I laughed, I was wow’d, but most of all I left the theater knowing I had gotten what I came for. Maybe that’s why the flaws are so easy for me to overlook.