At the start of the year “The Hobbit” was easily one of my most anticipated films of 2012. But over time my excitement has been tempered by less than flattering reviews and some bad press centered around director Peter Jackson’s decision to stretch this limited material into three feature-length films. But at the end of the day there was no way I was going to miss this movie. I still consider “The Lord of the Rings” one of the greatest movie trilogies of all time so naturally a prequel would be right up my alley. But I was still cautious and maybe a bit skeptical going yet. Could Jackson recapture the magic of his first trip to Middle Earth or is this an example of going to the well one too many times? Well, while maybe not as polished as any of “The Lord of the Rings” films, this is still a wonderfully satisfying fantasy adventure that not only connects to the previous films but charts its own ground with great effectiveness.

First I have to say that I have never read J.R.R. Tolkien’s incredibly popular book. In fact, I am one who prefers seeing the movie first and then reading the book afterwards. So often fans of the books come out of movie adaptations feeling unfulfilled. On the other hand, if I read the book afterwards, it builds upon what I’ve seen on screen. That being said, I’ve heard from many people who have said this film does a good job of sticking close to the source material. That’s quite an accomplishment for Jackson and is something that will most certainly satisfy many more critical viewers. 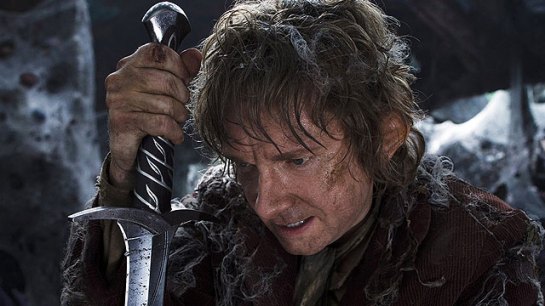 From a motion picture perspective, I was pleasantly surprised at how the film grabbed me and pulled me back into the amazing visual world created in the first trilogy. Right off the bat you feel a beautiful sense of nostalgia as Jackson revisits some very familiar places. There are also many familiar faces such as Frodo (Elijah Wood), Gandolf (Ian McKellen), Lord Elrond (Hugo Weaving), and Galadriel (Cate Blanchett). The movie’s presentation is also very familiar and Jackson’s strong camerawork and amazing locations were strikingly similar to the earlier films and that’s a good thing. Even the story does a good job of connecting itself to the previous trilogy. We see holes filled in and things set in motion that play out within “The Lord of the Rings” films. All of this really worked for me.

But the movie also sets out on its own path, a path which makes it uniquely different from the earlier trilogy. I was concerned because perhaps my least favorite part of the original trilogy was the early part of the first film which takes place in the Shire. I was leery at the thought of this film containing even more of that. But that’s not the case at all. Bilbo Baggins’ adventure with Gandolf and a group of dwarves into the world outside of the shire begins quickly and the remainder of the film follows a formula that’s fairly similar to “The Fellowship of the Ring”. Yes, there is a lot of tablesetting as we are introduced to new characters and the quest is define. But all of that should be expected especially for a big epic-scaled adventure trilogy such as this. We are also introduced to a few new characters including a young Bilbo Baggins nicely played by Martin Freeman. This is his story although it isn’t until later into the film that it really feels like it. We are also introduced to the most intriguing character of the movie Thorin brilliantly played by Richard Armitage. Thorin Is the leader of the company of dwarves and is the heir to a sacred land that the dwarves hope to reclaim. He’s a brave leader who is crippled by some heavy emotional baggage. He’s a blast to watch.

But this leads me into some of the problems with the film. The dwarves are a focal point of the film but we hardly get to know any of them. There are 13 dwarves in all but honestly I can only remember a small handful of them. And I couldn’t tell you much about them and wouldn’t know them by name. They simply feel underdeveloped and some of them seem to be nothing more than tag-alongs. Another issue I had with the film has to do with the quality of its heavy doses of CGI. There are some scenes that are simply breathtaking and will remind you of the great special effects work from “The Lord of the Rings”. But there are other times when the visuals look so transparently computer-animated. That’s usually not a big deal to me but here it seems so blatantly obvious in more places than I would have expected.

I also have a couple of issues with the film that deals more closely to the script. For some reason, Jackson incorporates several scenes featuring bathroom humor that’s not the least bit funny. He throws in burps, snot, bird poop, and posterior gags that aren’t vulgar but they feel cheap and terribly out of place. It’s a strange direction for Jackson to go in and it doesn’t work well at all. This story also lacks the sense of peril that the first films had. Now I don’t want to fall into the trap of going to far in comparing this trilogy to the original trilogy. This is its own film and this trilogy should be judged on its own merits. But one of the things that made “The Lord of the Rings” so enthralling was the scale of the threat that hung over the entire series. In this movie the threat feels more personal and therefore not as significant. In other words, the stakes don’t feel as high which kept it from having the real sense of importance and urgency.

But I don’t want to leave the impression that I feel this is a bad or even mediocre movie. Quite the opposite, this is an exciting and intense fantasy adventure that had me from its opening moments. Even more impressive is the fact that it’s two-hour and 45 minute running time flew by for me. I was never bored. I was never checking my watch. It excited me. It thrilled me. It also had me remembering how much fun Peter Jackson’s Middle Earth really is. It has its obvious stumbles, stumbles that keep it from being as great as it could have been. But I am all on board with this series and I can’t wait to see what lies ahead in the next chapter. Some may be critical of Jackson, but for me he’s done so many things right with this material that I can easily give him the benefit of the doubt.