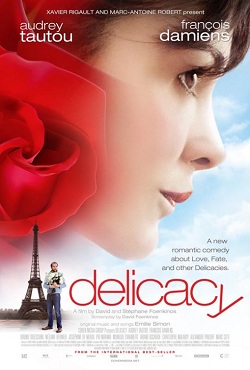 Over the past several days I’ve been catching up on movies I’ve wanted to see in an effort to close out the 2012 movie year. I was finally able I catch up with the French romantic comedy / drama “Delicacy”. What a shame it took me so long to get to it. “Delicacy” is such a sweet and witty little film whose cleverness works hand-in-hand with its simplicity. When watching this movie it won’t take long to recognize a fairly familiar premise. But that doesn’t matter especially when the material is this well-written and sure-footed. It offers nothing necessarily groundbreaking but it certainly worked for me.

The movie stars the perky and petite Audrey Tautou, the lead from 2001’s quirky yet brilliant “Amélie”. Tautou plays Nathalie and the film opens with her strolling into a small Paris restaurant. Sitting inside is François (Pio Marmaï). He watches Nathalie walk in and take a seat in the corner. He seems enamoured by her and begins trying to guess what she will order to drink. Is she a coffee or juice person? He makes a deal with himself. If she orders apricot juice he’ll talk to her. Strangely enough she orders apricot juice. He follows her out as she leaves and the two kiss outside the restaurant. In this lovely and playful scene we learn that the two are a couple and this was the restaurant where they first met. We get a good sense of this young couple’s relationship which eventually leads to marriage.

Nathalie and François are a perfect couple with great chemistry and big plans for the future. But that all changes in the blink of an eye on a seemingly normal afternoon. François is hit by a car and killed while jogging. This sends Nathalie into solitude where she tries to cope with her grief. The movie doesn’t cheapen her emotions but it also doesn’t overplay them. In fact I was struck by how well the film presents her grief while never feeling forced or manipulative. It was some of the truest bits of cinema I’ve seen all year. We watch her struggle with the reality of her shattered future plans. We also see how every detail of a loved one can haunt you. Whether it be memories of that favorite restaurant or a simple bottle of aftershave.

While Nathalie initially shuts herself off from the outside world, she eventually determines not to let her grief destroy her life. She forces herself back to work and opens herself back up to her family and best friend. But the opportunity for true healing may lie in an awkward, balding, middle-aged co-worker named Markus (François Damiens). The two seem the most unlikeliest of pairs. She is an attractive and radiant woman while he is an unattractive slob. But both have their fair share of baggage. Of course she is struggling with the loss of her husband and he hasn’t one shred of self-confidence. It’s these personal barriers that may keep them from finding a deeper relationship that they both need.

This really sets the table for most of the movie. We watch these two clumsily try to manage and figure out this budding relationship that they both seem to want. Yet their own inner conflicts are constantly warring against it. And then there are the superficial judgments of their coworkers and of Nathalie’s friends which never go beyond Markus’ exterior. But this is also where the movie takes on a much lighter tone. And while there is a more deeply emotional undercurrent, there are some very funny moments throughout the rest of the picture. Markus is both a sympathetic and funny character. A lot of the laughs come from his awkwardness. But he’s not a shallow guy at all and that’s what makes him such a good character.

“Delicacy” is a movie that could easily be dismissed as slight or fluff. But I think there’s a lot more going on under the surface that sets this movie apart. It’s well-written, well constructed, and well acted. It also has an undeniable genuineness to it and a competency in both the handling of the characters and with the narrative. Yes, variations of this story has been done many times before. But I love the sincerity, the humor, and the heart that permeates this entire picture. It’s a true delight and is head and shoulders above most of the romantic comedies you’ll find today.