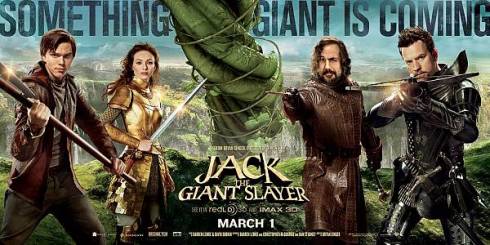 Hollywood is all about the fairy tales these days. Much like the superhero craze, we’ve seen a load of fairy tale features covering everything from Snow White to Hansel and Gretel. The latest is a variation of the familiar Jack and the Beanstalk story titled “Jack the Giant Slayer”. It comes from director Bryan Singer and to call it a slight deviation from the classic story would be misleading. This CGI laden fantasy picture takes a few of the ingredients from the fairy tale but basically builds its own original story.

I find Bryan Singer to be a very hit or miss director so I wasn’t exactly sure what to expect from this picture. What I got was an above average and sometimes surprisingly fun fantasy film that can be entertaining as long as you’re able to overlook its flaws. I know some who have struggled with doing that, but for me and my tempered expectations I actually came out of the theater a bit surprised. Unfortunately there are a few hiccups and for that I just can’t let the movie off the hook.

It almost feels like they took parts from several other fantasy films, threw them in a pot, and mixed them together to get the story of “Jack and the Giant Slayer”. I have no doubt that throughout the film you’ll be saying “yep, I’ve seen that before” repeatedly. We get the blind and bull-headed king who insists on an arranged marriage between his daughter and a devious lord. We get the poor commoner who falls in love with the princess. And we have a huge event that allows the commoner to prove his worth. Throw in a silly sidekick and a trusted protector and you’re into some pretty familiar territory. And while all of these characters play out pretty much as you would expect, I still think the story does enough fun things with them to entertain.

Nicholas Hoult (you may remember him from this years “Warm Bodies”) plays Jack, a poor farm boy who goofs up one day by trading his uncle’s horse to a monk for a handful of mystical beans. Of course you know the story, these are magical beans but Jack’s irate uncle doesn’t buy it and he flings them across the room with one falling through a crack in their floor. In a slightly similar story of frustrated youth, Princess Isabelle (Eleanor Tomlinson) pleads with her stubborn father King Brahmwell (Ian McShane) not to sanction her marriage to the slimy Lord Roderick (Stanley Tucci). As usual the King is blind to Roderick’s scheme to take over his kingdom even though we recognize it before he says a line of dialogue. Then again if some of these characters were smart we wouldn’t have much of the story left.

Repelled by the arranged marriage to a man she doesn’t love, the princess disguises herself and sneaks out of the city on horseback. But after ending up lost in the middle of a late night deluge she comes across Jack’s house where she seeks shelter. The two make starry-eyes at each other but are interrupted when the rainwater soaked bean under the house sprouts. And boy does it sprout! Jack is knocked out of the house and Isabelle is taken through the clouds by the humongous beanstalk. Soon the King and his men arrive and Jack informs them about the princess. A rescue team of Guardians led by Elmont (Ewan McGregor) and including Jack and Roderick head up the beanstalk to find the princess. But waiting above is a sky world inhabited by giants with a special appetite for human flesh.

Now even though this movie features some pretty standard characters I can honestly say I was interested in some of them. Hoult is quite good and believable as the unexpected hero. I also thought Tomlinson was solid and very princessy. Sadly she isn’t given anything to do outside of the typical damsel in distress routine. That’s unfortunate. I would love to see her character have more depth. I also didn’t mind Stanley Tucci, a very good actor who’s clearly having a lot of fun as the antagonist. And as always Ewan McGregor is very good giving a variation of the knight in shining armor. McShane on the other hand seems dry and by the numbers. That could be because his character was probably the most poorly written in the film.

But where the movie spends most of its money is on the visuals. “Jack the Giant Slayer” is a virtual feast of tantalizing eye candy. The beanstalks are incredibly well conceived. The scenery with its green meadows, huge waterfalls, and lush forests are nothing short of gorgeous. But the giants are the real treat, each designed with amazing detail. I was really surprised at just how well done they are particularly in some big action sequences in the second half of the film. But in spite of all of these great special effects I did at time feel a bit disconnected due to the massive amounts of CGI. It wasn’t the quality of CGI but the volume. And it wasn’t helped by the 3-D. Like so many films the 3-D offered nothing for me and it felt pointless. I also have to say some of the costume designs were pretty dreadful, specifically the royalty garb. I couldn’t help but laugh at McShane in his gold-plated monstrosity.

“Jack the Giant Slayer” is a mixed bag but overall I found it to be an entertaining mixed bag. If you can shake off the cookie cutter characters, the occasional cheap and lazy writing, and the overload of CGI there’s some fun to be had here. I can honestly say I had a good time with this picture and I would really like to praise it more. Unfortunately its shortcomings keep me from doing that and instead I’m left feeling that this could have been something really special. Instead we’re left with a good but not great film that left a lot of potential behind. Still, you could do a lot worse at the theater.