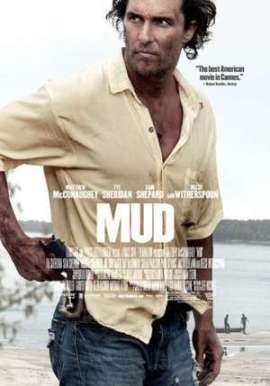 After just two feature films Jeff Nichols has become a director whose name instantly attracts my attention. His first film “Shotgun Stories” was a real and gritty look at rural southern life. His next movie “Take Shelter” was a powerful and potent look at mental illness and its effects on a working class family. It was pure brilliance and one of the best films of the last decade. Now he’s back with another slice of southern gothic storytelling. This time he teams up with some marquee stars and a slightly larger budget to give us “Mud”. But does a little more cash and bigger names equal success or does it take away from the down-to-earth filmmaking that Nichols is known for?

Let me get this out of the way, “Mud” is a scintillating piece of cinema. It’s a coming-of-age story. It’s a thriller. It’s a skewed romance. It’s a film that dabbles in several areas yet it all comes together in a gripping story full of life and grit. Nichols takes us to a world that I was mesmerized by and lost in – a world that many people don’t know exists today. He also gives us characters that interest us and that we care about. He raises the stakes and wraps them up in a mystery that we can sink our teeth into. In other words he gives us the experience that is at the heart of why we go to the movies.

Jeff Nichols started writing the story for “Mud” around 2000 and it’s clearly a personal project for him. Many critics have called this film a modern-day “The Adventures of Huckleberry Finn” and for good reason. Nichols was particularly influenced by the Mark Twain classics. But what makes this movie stand out is the familiarity that Nichols has for the locations and the people he is depicting. The reason we buy into the story is because of the sharp reality that we see through his constantly moving camera. Like me, Nichols is an Arkansas native and the stunning detail and unashamed portrayal of a vanishing river subculture and small town life was as honest of a depiction as I’ve ever seen on screen.

It’s here in the south Arkansas delta, that 14-year-old Ellis (Tye Sheridan) calls home. His family is part of a low income river community that works the waterways as a source of income. He and his best friend Neckbone (Jacob Lofland) are adventurous sorts. One day they take their boat out to an island and discover a bigger boat left in the trees after a recent flood. They claim it as their own but there’s one problem. Someone has beaten them to it, namely a mysterious stranger who goes by the name of Mud (Matthew McConaughey). Ellis and the more cautious Neckbone develop a friendship with Mud but soon find out he’s a man of many secrets. 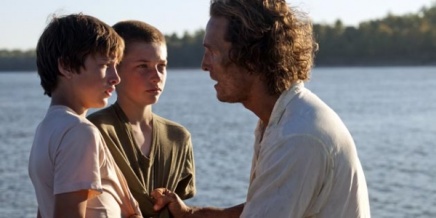 The movie builds itself around the mystery of Mud. Who is he, where did he come from, and why is he hiding on the island? Is he harmless? Is he dangerous? McConaughey and Nichols combine to create a fascinating character and I was thoroughly intrigued by him as they peeled back layer after layer. McConaughey seems to have reinvented himself over the past two years and his career has taken a better turn. But despite his recent good work, nothing he has done matches the phenomenal performance he gives here. For my money this is his very best work and I found myself always anxious for his next scene.

Just as impressive is young Tye Sheridan as the sensitive, tough, and vulnerable Ellis. I loved watching Sheridan navigate his scenes of discovery, revelation, and heartbreak like a seasoned professional. There was never a moment in the film that seemed too big for him and he felt right at home in his character’s shoes. This is really his story and the movie wouldn’t have worked without his amazing performance.

Nichols also puts together an incredible supporting cast loaded with personal favorites of mine. Reese Witherspoon plays a beautiful stranger who arrives in town and who may have deeper connections to Mud. She’s very good here and her name adds some pop to the cast but it’s a fairly small role. Sam Shepard is great as a surly old river hermit who prefers to be left alone. A Jeff Nichols favorite, Michael Shannon also appears in a small but well acted role as Neckbone’s uncle and guardian. But I want to single out a terrific supporting performance by the underrated character actor Ray McKinnon. He plays Ellis’s father and it’s a much more layered role that you might at first think. This is a character that’s right in McKinnon’s comfort zone and he shines particularly in what I thought were two of the movie’s more stirring and emotional scenes. 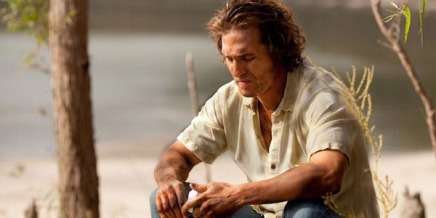 While “Mud” is a deep south thriller filled with mystery and intrigue I was surprised to find a deeper reoccurring theme that penetrates the entire story. It’s really a movie about love. Throughout the film we see the ravaged emotions, fractured relationships, and heartbroken cynicism left in the wake of failed love. A big part of the film focuses on Ellis’s confusion over what he believes love to be and the harsher reality that he witnesses all around him. It’s sad to watch him innocently cling to his idyllic perception of love. In fact, every character in the film has some dealings with the painful side of love. The way Nichols weaves this throughout his narrative is simply genius.

There are only a couple of things which keep me from calling this the perfect movie. One centers around the Neckbone character. Young Jacob Lofland delivers a nice performance especially considering he had no acting experience. My problem with his character isn’t in his work but surprisingly in Nichols’s writing. Neckbone is a potty mouth and Nichols uses that as a source of humor. But he constantly goes back to it over and over through the entire movie. First of all I don’t particularly find a cursing kid that funny, but beating the same drum over and over was a drag. There’s also a big sequence at the end that is actually satisfying although it’s a bit jarring. It delivers in the end but it did feel a little out of place with the rest of the movie.

That said, it’s clear to me that “Mud” once again verifies that Jeff Nichols is a master craftsman who uses his southern roots and appreciation for classic filmmaking to tell stories rich with vigor and authenticity. “Mud” is an atmospheric and evocative film that takes a southern fried look at adolescence. It’s nestled in the reality of trot lines, cottonmouths, Piggly Wigglys, and Big Banjos while never coming across as clichéd or condescending. It’s a part of the world not far from where I live which makes the movie’s treatment all the more satisfying. “Mud” was my most anticipated movie of 2013 and my expectations were through the roof. Thanks to Jeff Nichols for exceeding those expectations with what will surely be one of the year’s best films.